Syria’s ambassador to the United Nations in Geneva threw a tantrum and then stormed out of an emergency session of the U.N. Human Rights Council on Tuesday. 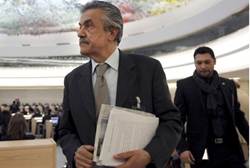 Faysal Khabbaz Hamoui charged that sanctions imposed on the regime of Syrian President Bashar al-Assad for its brutal year-long crackdown on civilians, prevented Damascus from buying medicines and fuel. He then abruptly walked out the council’s emergency debate on Syria.

“We declare our withdrawal from this sterile discussion,” Hamoui said before leaving a room filled with government ministers and senior officials who had gathered for the session.

“Unjust and unilateral sanctions imposed by some countries on the Syrian people are preventing access to medicines, to fuel in all forms as well as electricity, and are also impeding bank transfers to buy these materials,” he said.

He accused some members of wanting to use the opening “high-level” segment and “convert it into slander and libel”.

“We are convinced that the real aim is to cover up for the violence and murder perpetrated by armed groups against innocent civilians,” said Hamoui.

The United Nations’ main human rights body was set to condemn Syria on Tuesday for using heavy weapons on residential areas and persecuting opponents, its fourth rebuke to Assad in an 11-month uprising.

UN High Commissioner for Human Rights Navi Pillay said she was appalled at the rapidly deteriorating rights and humanitarian situation in Syria and shelling of Homs.

Hospitals are overwhelmed and makeshift clinics have been set up in hard-hit areas to treat the wounded, she said.

Pillay, a former UN tribunal war crimes judge, reiterated that Syria should be referred to the prosecutor of the International Criminal Court (ICC).

The urgent debate came at the request of Turkey and three Gulf countries, Qatar, Kuwait and Saudi Arabia, with backing from the United States and European Union.

It began just days after UN investigators accused the highest levels of the Syrian government and army of ordering crimes against humanity including murder, rape and torture.

The 47-member forum, which has ‘moral authority’ but no legal power, looked set to adopt a resolution condemning Syria’s “continued widespread and systematic violations”, diplomats said.

Drafted by the Arab countries and Turkey, the resolution condemns “the use of heavy artillery and tanks to attack residential areas … that have led to the deaths of thousands of innocent civilians”.

It also voices alarm at the humanitarian crisis in areas lacking food, medicine and fuel and calls for aid agencies to be allowed to deliver vital supplies to civilians in heavily hit areas, especially Homs, Deraa and Zabadani.

The meeting came as Assad sent units of an elite armored division into Homs on Tuesday as rebel-held districts came under the heaviest bombardment of a three-week offensive.

UNHRC officials in January reported at least 5,400 civilians had been killed by Assad’s forces during the year-long crackdown, but stopped counting due to pervasive chaos in the country.

Independent human rights organizations say the number of civilian deaths has spiraled to at least 7,300 since then.

In Case You Missed It:  Megadeth Rocker Tells Audience ‘We Have The Power To Push Back Against Tyranny’ (VIDEO)
Posted in Terrorism and tagged Freedom, Islam, Jihad, Syria, Terrorism, United Nations.

The Chinese Economy at the Crossroads