This article by Ran Baratz is republished courtesy of Jewish Ideas Daily to complement our coverage of Norman Finkelstein’s attack on the BDS (Boycott, Divestment and Sanctions) movement. 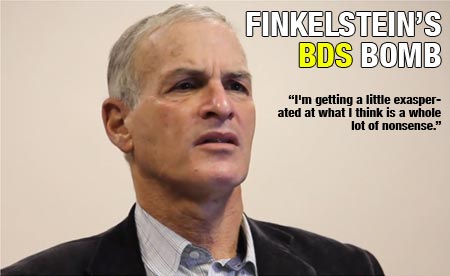 Ubiquitous anti-Israel activist Norman Finkelstein stirred up the blogosphere last week.  In a YouTube interview with pro-Palestinian advocate Frank Barat, Finkelstein said—in his aggressive, condescending way—that members of the Boycott, Divestment, and Sanctions movement (BDS), which Finkelstein has prominently supported, care less for human rights than they do for Israel’s destruction.  When Finkelstein saw the reactions, rumor has it he tried to get Barat to take the video down.

But Finkelstein’s angry comrades didn’t understand what he was really admitting.

Finkelstein got into trouble when he said that some people in BDS “don’t want Israel.”  He lectured his BDS colleagues:

Stop trying to be so clever, because you’re only clever in your cult.  The moment you step out, you have to deal with Israeli propaganda . . .  They say, “No, they’re not really talking about rights; they’re talking about they want to destroy Israel.”  And in fact I think they’re right, I think that’s true.

In fact, Finkelstein said, it is “not an accident, an unwitting omission, that BDS does not mention Israel”: They “know it will split the movement, because there’s a large segment—component—of the movement that wants to eliminate Israel.”

You can see why anti-Israel people were offended to hear this from Finkelstein, of all people.  Yet Finkelstein was not revealing some deep secret about the motives of those BDS-ers.  Anyone who has listened to their leaders, read their papers, seen them at play, or checked out their circle of acquaintances, supporters, and collaborators can hardly be surprised.

Finkelstein made his truly subversive comments elsewhere in the interview, and—perhaps not accidentally—they have provoked much less reaction from anti-Israel opinion.  BDS is “a cult,” Finkelstein said:

And I personally, I’m tired of it. I went through my cult stage. I was a Maoist. . . .  I’m not going to be in a cult again. I’m not going through that stage again, with the gurus in Ramallah, you know, giving out marching orders. And then if you disagree, they say, “10,556,454 Palestinian civil society organizations have endorsed this.”

Who are these organizations?  They’re NGOs in Ramallah, one-person operations, andthey claim to represent what they call this thing, “Palestinian civil society.” . . .  [T]hen why can’t they ever organize a demonstration of more than 500 people? . . .  [They]represent absolutely nothing.

The interviewer defended BDS, saying it was “attuned to the international community” rather than Palestinian groups.  “That, to me, is a problem,” Finkelstein said:

If you’re an indigenous organization in Palestine, you should be organizing your people, and it’s our job, to organize from our side. I went through many solidarity movements. The Vietnamese never gave us marching orders. The Nicaraguans, the El-Salvadorians, they didn’t tell you what to do. They organized their people. And as a solidarity movement abroad, we were supposed to make the judgment about how best to organize ourselves. And it’s a very strange thing when the people there, who claim to be the leaders of civil society . . . can’t organize a demonstration of 500 people among themselves, but they’re telling everybody else abroad what to do.  That’s a weird inversion.

This, in my view, is the real dynamite.  Finkelstein is saying that one-man Palestinian non-governmental organizations in Ramallah are grossly misrepresenting themselves—and that they control BDS and other “international” human rights groups.  If I said these things, I would be branded an Israeli propagandist.  But Finkelstein knows them as an insider.  These are truths slipped out to us through the holes in the internet, and they can help us understand the grossly disproportionate amount of human rights activity in Israel.

Let us begin with Finkelstein’s accusation about the self-inflated one-man NGOs.  Why their proliferation?  The reason is money, lots of it.

Recovering Israeli Soldier: ‘It Was a Lynch’

One of the soldiers attacked over the weekend in Haifa by a gang of young Arabs, remains hospitalized with dizziness,...