The Pentagon has detailed plans for military action if President Barack Obama decides to intervene in a humanitarian move to stop the Syrian President Bashar Assad’s death machine that has murdered thousands of opponents, CNN reported Wednesday. 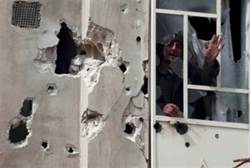 A man shouts from window after shelling by Assad's army

U.S. Secretary of State Hillary Clinton suggested Tuesday that Assad could be termed a “war criminal.”

The United States so far has refused to provide arms for the Free Syrian Army, which is trying to defend itself against merciless shelling by Assad’s forces of anyone who speaks out against the regime, but the Pentagon is preparing for a possible scenario of American troops on Syrian soil.

“There are lots of ideas floating around,” an official told CNN. “People are teeing up options. We want to understand what is the art of the possible.”

The desk-drawer Pentagon plans include a “full range of options,” but one potential problem is the lack of certainty of the “day after” Assad is forced to step down and what will happen to his chemical weapons. Assad could flee, or be killed, but his loyalists might continue to rule the country. The chances of the opposition taking over are nil, for the time being, because the protest movement does not have a national leader and also has no weapons except for those taken over by army deserters and protesters.

The Pentagon plans detail how many soldiers and what weapons will be needed to guard chemical weapons in Syria and to provide the orderly distribution of humanitarian aid. Opposition activists have reported that people are starving to death as Assad’s forces cut off supplies to Homs and other centers of anti-Assad protests.

Clinton told a Senate committee Tuesday that Assad could “fit into that category” of being a war criminal but added that the classification would not necessarily hasten his downfall.

American satellites are gathering intelligence in surveillance flights over Syria with information on Syrian army ground movements, and American intelligence has tapped into communications by regime leaders.

The United Nations continues to limit its action to words as estimates of the death toll continue to rise with the increasing probability that the actual numbers are far higher. More than 7,500 people are reported to have been killed in the year-long uprising, but thousands of others have “disappeared” or have been arrested.

This article by Ran Baratz is republished courtesy of Jewish Ideas Daily to complement our coverage of Norman Finkelstein’s attack on...