One of the soldiers attacked over the weekend in Haifa by a gang of young Arabs, remains hospitalized with dizziness, aches all over, and the word “Open” cut into his scalp. 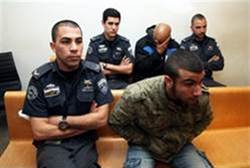 “I am very weak and in pain all over my body… head, neck, legs, mouth, and back,” the soldier told Army Radio. “At the moment, I am waiting for more tests, to be held tomorrow.”

The soldier recalled, “I went with my friend, who had taken sick leave because of pain in his hand, when the a group of Arabs emerged from a car in front of us,” he related.

“Someone came immediately from the car while shouting ‘Jew, Jew’, and suddenly about 30 Arabs converged from different directions,”  the soldier said. “It was clear that it was a deliberate and premeditated attack, otherwise they could not organize so many people.”

“After hitting me with clubs, while chanting ‘Jew, Jew,’ one of the attackers held my arms behind my back, the other grabbed my head, then they kicked me and I fainted.”

The two soldiers are convinced that they were targeted because they were Jewish.

“It was an attempted lynching in the real sense of the word,” the soldier said. “I thought about my life, and I was afraid I would not survive. Fortunately we were rescued by hospital security guards.”

Police arrested a tenth suspect involved in the attack over night. The young Arab, a local resident in Haifa, was arraigned on Wednesday.

The investigation is still ongoing.

The Democratic National Committee (DNC) has made an aggressive pre-buttal against potential attacks on President Barack Obama over the AIPAC...