Andrew Breitbart, the outspoken conservative writer, activist and website operator, has died unexpectedly in Los Angeles, where he lived with a wife and four young children. He was 43. 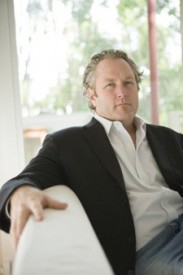 Breitbart was pronounced dead at the UCLA Medical Center shortly after midnight, the Los Angeles County coroner’s office told Yahoo News. The cause of death was not immediately known, a spokesman at the coroner’s office said.

One of his websites, BigGovernment.com, announced his death early Thursday.

“Andrew passed away unexpectedly from natural causes shortly after midnight this morning in Los Angeles,” the note on his website read. “We have lost a husband, a father, a son, a brother, a dear friend, a patriot and a happy warrior. Andrew lived boldly, so that we more timid souls would dare to live freely and fully, and fight for the fragile liberty he showed us how to love.”

It’s unclear what those natural causes were. A representative for the website did not immediately return a request for more information. According to the Associated Press, Breitbart collapsed while walking near his home in Westwood Hills.  Paramedics could not revive him after he collapsed, his father-in-law Orson Bean told the Associated Press. A neighbor saw Breitbart fall and called 9-1-1. Emergency crews tried to revive him and rushed him to the emergency room at UCLA Medical Center, Bean said.

Breitbart had suffered heart problems a year earlier, but Bean said he could not pinpoint what happened.

“He was one of the most fearless people I ever knew,” a shaken Jonah Goldberg, founding editor of the National Review Online, said on Fox News. “One of his favorite pastimes was to retweet all of the hate that people threw at him, because he considered it a badge of honor. It was his Wheaties.”

Goldberg added: “He was the modern conservative’s iteration of a 1960s radical. He loved the fight.”

“He was completely fearless,” Tucker Carlson, editor of the Daily Caller, said. “And he thrived on the brawling.”

“What a huge loss, in my opinion for our country and certainly for the conservative movement,” Rick Santorum told press traveling with his campaign. “My prayers go out to his family.”

Breitbart’s death was also a blow to his liberal friends, too.

“It was always funny to many of his friends that Andrew Breitbart, after he became famous, was probably most famous for being a 100 percent polarizing political lightning rod,” Matt Welch, editor-in-chief of Reason magazine, wrote on Thursday. “The reason that was funny was two-fold: He didn’t actually have strong philosophical/policy beliefs–at all–and he was always perfectly comfortable and perfectly welcome in ideologically and culturally diverse settings.”

“I was asked many times this morning for my thoughts on what Andrew meant to the political world, but all I can think of at the moment is what Andrew meant to me as a friend, starting from when we worked together,” Arianna Huffington wrote in an email to Yahoo News. “His passion, his exuberance, his fearlessness. And above all, what I’m thinking of at the moment is his amazing wife Susie and their four beautiful young children. My love and thoughts are with them right now.”

And in the hothouse world of online political media, they broke some big news. Breitbart–who oncetold Slate his “entire business model is to go on offense”–was credited with breaking a series of undercover videos showing alleged malfeasance at the offices of community-organizing group ACORN.

“He was probably the most fearless person I ever met,” Greg Gutfeld, host of Fox News’ “The Five,” said.

Before his passing, Andrew Breitbart claimed to have had film footage of now US President Barack Obama during his young, socialist and radical college years. Breitbart told the CPAC audience that he will release them later this year, during the upcoming presidential campaign to expose Obama’s radial roots.

In Case You Missed It:  More than 100 young people hospitalized for vaccine-related heart problems in Ontario
Posted in Freedoms and tagged Conservatism, Republicans.

Once again, President Barack Obama has proposed lowering the income tax deduction for charitable giving. In his proposed budget for...