At the EU summit meeting in Brussels on Friday, all countries in the union, with the exception of the United Kingdom and the Czech Republic, signed a fiscal governance pact that would compel the signatories to incorporate the principle of a balanced budget into national law. 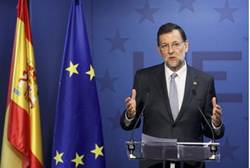 Countries that flouted the rules and ran up a deficit would be under surveillance and would be forced to carry out structural reforms. If they did not, they could be hauled before the European Court and fined. When 12 of the 17 eurozone countries have ratified the treaty it will go into law. The enticement t sign is that only signatories will be entitled to draw upon the European bailout funds.

No sooner was the ink dry on the treaty, when  two signatories – Spain and Holland,  let it be known that they would find it difficult to meet the 3% of GDP deficit limit. Spain is in a particularly difficult situation as the new Popular Party government of Mariano Rajoy inherited a deficit of over 8% and even with Herculean efforts, the government cannot meet its target of halving the deficit . Spain’s economy is contracting and already high unemployment grew by an additional 2%. Spain, however, encountered little sympathy aside from praise for its efforts up to now.

Finnish Prime Minister Jyrki Katainen told reporters “we have common rules for everybody and we have just agreed on new, tougher rules so it would be completely wrong…to give more room for the deficit.”

Spain’s difficulties were known. Holland, with its AAA rating and previous insistence on fiscal discipline, is an unpleasant surprise. The Dutch government predicts deficits of 4.5%, 4.1% and 3.3% during the next 3 years in violation of the treaty that Holland just signed.

The government had planned to stagger €18 billion in budget cuts over the next 4 years, Now, if it is to conform to the budget, it will have to cut €15 billion next year alone. This will pose both a fiscal and coalition crisis. Holland is governed by a minority government that receives external support from the Freedom Party, which advocates restrictions on immigration and a populist economic policy. It is doubtful that the Freedom Party can swallow such massive cuts.

With an initial turnout of 65 percent in Iran's parliamentary election on Friday the political future of President Mahmoud Ahmadinejad...