With an initial turnout of 65 percent in Iran’s parliamentary election on Friday the political future of President Mahmoud Ahmadinejad looks bleak. 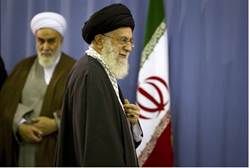 Iran’s ultra-conservative Islamic clerical leadership is eager to restore the damage to its legitimacy, caused by the violent crackdown on dissent and claims of vote-rigging after Ahmadinejad’s re-election in 2009.

Supreme Leader Ayatollah Ali Khamenei, who endorsed the 2009 result, has since turned sharply against Ahmadinejad.

Khameini, 72, and Ahmadinejad locked horns early last year in a contest of wills that observers say Iran’s Supreme Leader, who has since called Ahmadinejad a religious ‘deviant,’ was destined to win.

Early results from Friday’s vote indicated the bombastic and divisive Ahmadinejad’s supporters were losing ground in the 290-seat parliament.

His sister, Parvin Ahmadinejad, failed to win a seat in their hometown of Garmsar, the semi-official Mehr news agency said.

Elsewhere, Khamenei loyalists appeared to be doing well, but final results are expected on Saturday as the millions of ballots cast must be counted by hand.

The vote is expected to have little impact on Iran’s foreign or nuclear policies, in which Khamenei already has the final say, but could strengthen the Supreme Leader’s hand before a presidential vote next year.

Ahmadinejad, 56, cannot run for a third term and is facing a return to the relative obscurity he emerged from in 2003.

The outgoing parliament has summoned him to answer sharp charges next week about his handling of the economy in unprecedented hearings that will also delve into USD 2.4 billion in misdirected state funds.

But the vitriolic Ahmadinejad may try to turn the tables on his critics during the hearings in the hopes a dramatic public stand will shore up his position.

Global oil prices have spiked to 10-month highs on tensions between the West and Iran, OPEC’s second biggest crude producer.

Iran has been hard hit by Western sanctions over its refusal to halt sensitive nuclear activity that Israel, the United States, its Western allies, and Gulf Arab states say is dedicated to producing nuclear weapons.

Prime Minister Binyamin Netanyahu, who is in Washington for the American Israel Political Action Committee conference, is slated to meet with US president Barack Obama to discuss Iran.

Netanyahu is expected to demand Obama commit to a strike on Iran’s nuclear facilities should it “cross nuclear red lines” marking a bid for weaponization of its nuclear stockpile.

Officials in Tehran have repeatedly called for the destruction of the Jewish state and referred to Israel as a “one bomb state.”

Obama – who recently referred to US support for Israel as ‘sacrosanct’ – said Friday, “As president of the United States, I don’t bluff,”  but simultaneously argued against a pre-emptive Israeli strike.