Many of us, I’m sure, dream of traveling the world. Exploring new cultures and witnessing some of the most breathtaking places in far away exotic places. Most of us will have at least one destination we wish we could escape to whenever we are sick of home. But with the good comes the bad, places we would never consider visiting because we’ve heard about their bad reputations in the news. Well, in no particular order, here are ten of the most dangerous cities in the world that we would not dare to visit. 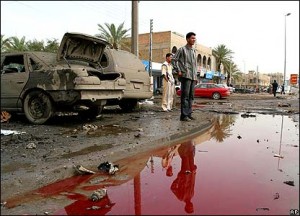 As this horrifying image depicts, a river of blood coupled with bombed out vehicles is nothing new to the locals of Baghdad. The war-torn capital of Iraq was declared the least safest city in the world, according to Mercer’s 2008 quality of living global index. With a history of violence, war, bombings and bloodshed today’s Baghdad has seen little change despite the execution of their ruler Saddam Hussein. Since the U.S. invasion in 2003 more than 650,000 civilians have lost their lives and thousands of others have fled the danger. 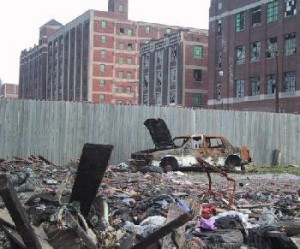 The American city known as “Motor City” was the top of Forbes’ list of the ten most dangerous cities around American in 2009. The magazine based its finding on violent crime statistics, which they obtained from the FBI’s crime reports. In case you were wondering there was a reported 1,220 violent crimes committed per 100,000 people in the city. 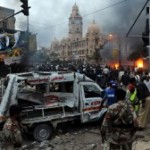 Ranked as one of Asia’s lowest-scoring destinations for personal safety according to Mercer’s study. In recent years Karachi has seen repeated terror attacks and suicide bombings. In February this year more than 30 people were killed in a dual bomb attack, while in December 2009 another blast saw the death toll reach over 40 (pictured). 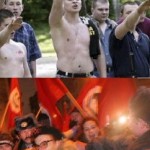 It is said that the Russian Mafia runs the city with more gangsters than police, while a Russian is assassinated every 18 minutes averaging 84 murders per day in a nation of 143 million. The city has also been accused of extremism, racism, prostitution, drug trafficking and kidnappings, not to mention the untold violence dished out by the Chechen rebels. 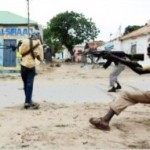 Somalia’s capital has been devastated by the ongoing civil war. In 2008 statistics showed that half of the city’s population (0.5 million) had fled the war-torn area. Dozens of people are injured every day by the conflict while frequent bombings kill many civilians. Since President Siad Barre was usurped from power in 1991 over one million Somalians have lost their lives due to the civil war or famine. 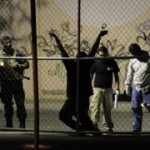 Home to 1.5 million people the city lies on the border with the U.S. In recent times it has seen a rapid increase in shocking violent crimes, mainly due to the feuding drug cartels. Their violence has put an increased risk on the safety of locals. Since January 2007 there’s been 8,330 drug-related murders in Mexico, 50% of which came from Ciudad Juárez. The city has 130 murders reported per 100,000 inhabitants. 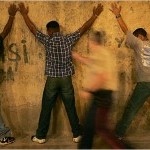 The Foreign Policy magazine dubbed Caracas as the “murder capital of the world” at the end of 2008. In December of that year alone there were 510 people murdered. Like Ciudad Juárez the majority of the violence comes from gangs and drug wars. There has also been an increase in poverty in Venezuela’s capital; between the 1970s and 1990s the poverty rate increased by 300% to 65%. It’s also been reported that the murder rate has increased by 67% since President Chavez took over. 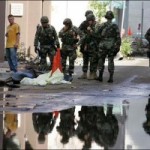 The murder capital of the USA sees an average 95 murders per 100,000 residents, which is shockingly high when you consider the fact that there are only 300,000 residents in the city overall. Even scarier when you think that Time magazine reported that Baghdad has a murder rate of 48 per 100,000 residents. Violence in the area is rife because it is one of the poorest in the U.S. Hurricane Katrina did little to help that problem either. 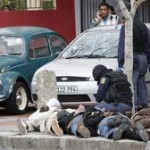 South Africa has been riddled with crime for years now and Cape Town is the most dangerous city in the country. Murder and robbery, rape and kidnappings are the biggest problems in the area, and tourists are notable targets. It has a murder rate of 62 to every 100,000 residents. Travelling alone at night and even using an ATM alone is strongly advised against. Sexual offenses, robberies and burglaries have all increased in the last two years; 71,500 sexual offenses (10% rise), 13,900 robberies (41% rise) and 18,400 burglaries (27% rise). 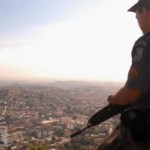 Despite being home to the world’s biggest carnival Rio de Janeiro is also one of the most dangerous places on Earth. As soon as travelers get off the plane they are handed leaflets of do’s and dont’s. Not wearing jewelery and not carrying your wallet (take as little money out with you as you can) are some of the things visitors are told. In the last two years crime rates have risen, especially violent crimes. A local drug cartel known as the Pirahnas are largely responsible for the increased violence and are notorious for abductions too. Last year there were 8,000 murders in the city, which is close to 20 a day!

In Case You Missed It:  NYC, DHS will release non-toxic gas at 100-plus locations in preparation for chemical, biological attack: Is Biden's America in danger?
Posted in Freedoms and tagged Crime.

Does unprecedented deficit-spending such as on highways stimulate the economy? For the last few years, some have argued it could....