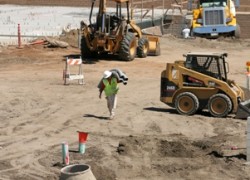 We have consistently argued that deficit spending on highways or anything else intended to lift aggregate demand, and therefore jobs, must and would fail. The economic evidence that we were right has now been joined by the illustrious trio of The Washington Post, the Associated Press, and the esteemed Alice Rivlin, former director of the Congressional Budget Office and the Office of Management and Budget.

Monday’s edition of the Post carries a story sourced to the Associated Press entitled, “Highway bills pitched as by lawmakers as job creators, but are they really? Economists say no.”

Notice especially the subject of the piece: federal highway spending. If ever there was a sympathetic topic for stimulus, it is infrastructure spending, especially highway funding. Remember, these were some of President Obama’s “shovel-ready” projects that turned out to be not so shovel ready, as he later admitted.

So what went wrong? Why is this not short-term stimulus? The widely respected Rivlin explained it clearly and succinctly: “Investments in infrastructure, if well designed, should be viewed as investments in future productivity growth.”

She went on to say that if investments in infrastructure “speed the delivery of goods and people, they will certainly do that. They will also create jobs, but not necessarily more jobs than the same money spent in other ways.”

This speaks to a longstanding flaw of highway spending arguments. Proponents argue that this spending creates tens of thousands of jobs, and they are half right. The other half is the tens of thousands of jobs not created (or saved) by shifting spending to highways from other areas in the economy. The valid argument about infrastructure spending is: If done right, it will lift future productivity growth, not current job growth.

The central failing—the essential fiscal alchemy of Keynesian stimulus—is the belief that government can increase total spending in the economy by borrowing and spending. What Keynesians ignore is that we have financial markets whose job in good times and bad is first and foremost to shift funds from savers to investors, from those who have money they do not wish to spend today to those who have a need to borrow to spend as much as they’d like, whether on new business equipment, a home, or a car.

There are no vast sums of “excess funds” just sitting around in bank tellers’ drawers waiting for government to borrow and spend them. Government borrowing means less money available to the private sector to spend. So government deficit spending goes up, and dollar-for-dollar private spending goes down. America’s resources are generally speaking spent less wisely, and the federal debt is unequivocally higher.

If past is prologue, the current infatuation with Keynesian deficit spending as stimulus will fade, just as it always has in the past, in this country as elsewhere. Perhaps this simple WaPo article marks the beginning of the end for the latest incarnation of this fiscal folly.

The Emergency Committee for Israel (ECI), which has spent hundreds of thousands of dollars on public campaigns prior to the...