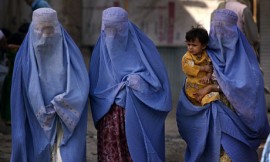 KABUL, Afghanistan (AP) — Afghanistan’s president on Tuesday endorsed a “code of conduct” issued by an influential council of clerics that activists say represents a giant step backward for women’s rights in the country.

President Hamid Karzai‘s Tuesday remarks backing the Ulema Council’s document, which allows husbands to beat wives under certain circumstances and encourages segregation of the sexes, is seen as part of his outreach to insurgents like the Taliban.

Both the U.S. and Karzai hope that the Taliban can be brought into negotiations to end the country’s decade-long war. But activists say they’re worried that gains made by women since 2001 may be lost in the process.

When the Taliban ruled Afghanistan prior to the 2001 U.S. invasion, girls were banned from going to school and women had to wear burqas that covered them from head to toe. Women were not allowed to leave their homes without a male relative as an escort.

The “code of conduct” issued Friday by the Ulema Council as part of a longer statement on national political issues is cast as a set of guidelines that religious women should obey voluntarily, but activists are concerned it will herald a reversal of the trend in Afghanistan since 2001 to pass laws aimed at expanding women’s rights.

Among the rules: Women should not travel without a male guardian and women should not mingle with strange men in places like schools, markets or offices. Beating one’s wife is prohibited only if there is no “Shariah-compliant reason,” it said, referring to the principles of Islamic law.

Asked about the code of conduct at a press conference in the capital, Karzai said it was in line with Islamic law and was written in consultation with Afghan women’s groups. He did not name the groups that were consulted.

“The clerics’ council of Afghanistan did not put any limitations on women,” Karzai said, adding: “It is the Shariah law of all Muslims and all Afghans.”

Karzai‘s public backing of the council’s guidelines may be intended to make his own government more palatable to the Taliban, or he may simply be trying to keep on the good side of the Ulema Council, who could be valuable intermediaries in speaking to the insurgents.

But either way, women‘s activists say that Karzai’s endorsement means that existing or planned laws aimed at protecting women’s rights may be sacrificed for peace negotiations.

“It sends a really frightening message that women can expect to get sold out in this process,” said Heather Barr, an Afghanistan researcher for New York-based Human Rights Watch.

Shukria Barikzai, a parliamentarian from the capital Kabul who has been active in women’s issues, said she was worried that Karzai and the clerics‘ council appeared to be ignoring their country’s own laws.

“When it comes to civil rights in Afghanistan, Karzai should respect the constitution,” Barikzai said. The Afghan constitution provides equal rights for men and women.

The exception for certain types of beatings also appears to contradict Afghan law that prohibits spousal abuse. And the guidelines also promote rules on divorce that give women few rights, a real turnaround from pledges by Karzai to reform Afghan family law to make divorces more equitable, Barr said.

“This represents a significant change in his message on women’s rights,” she said.

Afghan women’s rights activist Fatana Ishaq Gailani, founder of the Afghanistan Women’s Council, said she feels like women’s rights are being used as part of a political game.

“We want the correct Islam, not the Islam of politics,” Gailani said. She said she supported negotiations with the Taliban, but that Afghanistan’s women should not be sacrificed for that end.

Hadi Marifat of the Afghanistan Human Rights and Democracy Organization, which surveyed 5,000 Afghan women for a recent report on the state of women’s rights in Afghanistan, argued that the statements show Karzai is shifting more toward the strictest interpretations of Shariah law.

“In the post-Taliban Afghanistan, the guiding principle of President Karzai regarding women’s rights has been attracting funding from the international community on one hand, balanced against the need to get the support of the Ulema Council and other traditionalists on the other,” Marifat said.

“The concerning thing is that now this balance is shifting toward the conservative element, and that was obvious in his statement.”

In Case You Missed It:  “We Will Not Comply!” – Thousands March Against Covid Vaccine Mandates in NYC (VIDEO)
Posted in Terrorism and tagged Afghanistan, Crime, Freedom, Islam, Jihad, Muslims, Obama, Terrorism.

$9: Price for a Month’s Supply of Birth Control Pills at Target 3 Miles from Georgetown Law