Hamas has decided to show its pride in terrorist Ahlam Tamimi by giving her a talk show. Tamimi now hosts the weekly program “Nassim al-Ahrar,” which focuses on terrorists imprisoned in Israel. 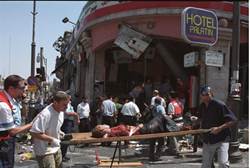 The show is broadcast on Al-Quds TV, and is heavily promoted by the channel.

Tamimi took part in the bombing at Sbarro restaurant in Jerusalem in which 15 people were murdered -7 of them children – in August, 2001. She has expressed pride in her role in the attack, telling a Jordanian interviewer, “I dedicated myself to the path of jihad for the sake of Allah… I would do it again.”

She was freed in 2011 as part of the mass prisoner release in exchange for captive IDF soldier Gilad Shalit.

Tamimi was released on the condition that she not return to Judea, Samaria or Gaza. Instead, she lives in Jordan, and interviews terrorists from there.

In one of her first programs, Tamimi interviewed a Hamas official who took part in coordinating the prisoner exchange. He called to free more terrorists, and stated that kidnapping Israelis is the only way to do so.

Syrian civilians are being murdered on a daily basis. Iran continues its quest for nuclear weapons capability. The Middle East...