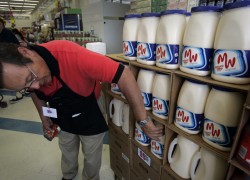 Food-stamp fraud and the government’s failed attempts to stop it were the focus of a House Oversight and Government Reform Committee hearing yesterday.

“[D]ozens of individuals who had been banned as food-stamp vendors nonetheless remained in the business in New York; Los Angeles; Phoenix; San Diego; Tulsa, Okla.; West Palm Beach, Fla.; Baltimore and other communities across the country,” according to the report. Scripps Howard discovered this by comparing U.S. Department of Agriculture disqualification records against documents from health-inspection reports to business filings and corporate certificates.

At yesterday’s hearing, Kevin Concannon, undersecretary of the U.S. Department of Agriculture’s Food and Nutrition Service, defended the government’s efforts to combat fraud. He also cast blame on the messenger.

“As with other leads and observations we receive from the public, we took this information very seriously. We began an immediate investigation into all of the stores that were brought to our attention and we have added further layers of security to our retailer oversight process. However, our research indicates that many of the cases identified by Scripps Howard do not involve improper activity,” he said.

Scripps Howard isn’t the first to expose food-stamp fraud. Heritage’s Rachel Sheffield wrote last year on The Foundry that $2.5 billion in taxpayer money that was spent on improper food-stamp payments. Lawmakers such as Rep. Jim Jordan (R–OH) and Sen. Jim DeMint (R–SC) have proposed reforms to the program.

“With record numbers of Americans using food stamps, with an annual price tag of $75.3 billion, anything short of rigorous anti-fraud measures will be very costly to taxpayers,” Issa said.

The USDA should have been conducting the oversight that the Scripps Howard News Service was doing, according to Issa. “It was the government’s own databases that [Scripps] went to and discovered there was no enforcement under this administration,” he said.

The most common type of fraud is food-stamp trafficking where retailers encourage food-stamp recipients to trade their benefits for cash, alcohol or cigarettes. Once the card is swiped, the merchant takes full payment for the transaction’s stated price and pockets the difference, which can add up to $50,000 a month.

“The crime is as widespread as it is simple: Stores accept food stamps, but instead of requiring that customers walk away with wholesome groceries, they provide the customers a small amount of cash — typically 50 cents on the food stamp dollar. While taxpayers lose out — the money isn’t going toward wholesome food — food stamp recipients are receiving no-strings attached cash while stores are taking a hefty profit for serving as a moneychanger,” according to the Scripps Howard report.

This fraud comes at a high price to taxpayers. “According to Reuters, food stamp fraud accounts for just 1 percent of food stamp benefits, but equals about $750 million each year,” Issa wrote in a letter to USDA. “Since President Obama took office three years ago, the number of SNAP enrollees has dramatically increased. Today approximately 46.1 million people receive food stamps, with 14 million of those individuals enrolling since President Obama took office.  According to the Washington Times, SNAP enrolled six million new people in Fiscal Year 2011 at an increased cost of $7 billion.”

The Supplemental Nutrition Assistance Program, which administers food stamps, has a mission to address hunger and poverty. The SNAP website reads like an advertisement: “Only 86% of eligible District residents, and 41% of eligible low-income working families, receive SNAP/Food Stamps. Every $1 of SNAP/Food Stamps spent in the community generates $1.85 in local economic activity. D.C. would gain millions in federal funds by signing up eligible households — funds that would stimulate the local economy. People who work sometimes assume they are not eligible for SNAP/Food Stamps, or that time-off from work is required to apply. This is not true. A family of 3 with a minimum wage earner could be eligible for over $3,000 annually in benefits, and working families can complete phone interviews rather than go to the SNAP/Food Stamps office in-person.”

Under the Obama administration, the United States has seen a dramatic increase in the welfare state, making individuals more dependent on government.

“Now, more than 67.3 million Americans depend on the federal government for everything from food stamps and college tuition to retirement services and health care,” according to Heritage’s Index of Dependence on Government, which revealed an 8.1 percent increase at a cost of roughly $2.5 trillion.

The IDF hit and killed on Friday several Gaza-based terrorist gangs, including a senior leader of the Popular Resistance Committees...