Southern Israel was hit by a barrage of at least 35 rockets and missiles on Friday evening, resulting in casualties. 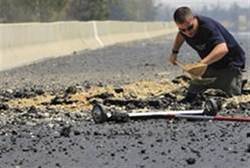 Three foreign workers were injured after a mortar shell was fired from Gaza and exploded in an area in the Eshkol Regional Council, according to a Channel 2 News report.

Magen David Adom spokesman Zaki Heller told Channel 2 that one of the workers was seriously injured, a second was moderately injured and that the third suffered from shock. The seriously injured man was being airlifted to the Soroka Hospital in Be’er Sheva, according to Channel 10 News.

Rockets also hit the city of Ashkelon and the community of Gan Yavne, Channel 2 reported. In Gan Yavne, one man was hurt as he ran after hearing a siren, and in Ashdod two residents were lightly injured after they tripped on their way to a secured area. One man suffered shock in Ashkelon.

The report said that many residents reported of hearing explosions in Ashdod, but it is not yet known whether rockets exploded near the city. The Eshkol Regional Council reported that the rockets caused damage to a vehicle and to power lines.

Explosions were also heard in Be’er Sheva, where the Iron Dome defense system shot down a Grad missile which had been fired at the city. Channel 10 News reported that Iron Dome had managed to shoot down at least six rockets throughout the day.

The escalation in the rocket and mortar attacks began after the IDF hit and killed several Gaza-based terrorist gangs, including a senior leader of the Popular Resistance Committees terror group.

Shortly after 8:00 p.m. (Israel time), the IDF struck two additional terrorist cells, one in central Gaza and one in northern Gaza. According to reports in the Israeli media, two terrorists were killed in this attack, both from the Islamic Jihad.

The Popular Resistance Committees said following the killing of its leader that the group is no longer committed to a ceasefire with Israel.

The Rise of the National Socialist Dragon

by Ranbir Singh   When I first stumbled across FA Hayek's Road to Serfdom it was over half a century...