“The Obama administration on Monday blocked a new Texas law requiring voters to show photo identification before they can cast a ballot because of Obama’s concerns that it could harm some Hispanic voters who lack such identification.” 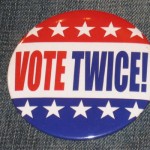 ..This is the second state voter identification law blocked by the Obama administration, earlier objecting to a strict new law in South Carolina from taking effect as well.”

The DOJ has no valid reason for rejecting this important law, which requires nothing more extensive than the type of photo identification necessary to receive a library card or board an airplane.

In both Texas and South Carolina, people cannot legally have an adult beverage in a bar, buy package alcohol, or gamble in a casino without a valid government issued ID, but they can vote without ID according to the Obama administration.

In 2006, election officials discovered at least 1,492 “potentially fraudulent” voter registration cards in St. Louis,In the state of Missouri, 12 ACORN members were convicted of voter fraud. Also in 2007, in Kansas City, Missouri, four employees from the left-wing activist organization ACORN were indicted for fraud. Then again another eight ACORN employees in St. Louis city and county pleaded guilty to federal election fraud for submitting bogus voter registrations. And, that was just Missouri.

Obviously, requirement of ID is not about Hispanics, it is about not allowing voter fraud.

ID’s can be obtained free of charge from the Motor Vehicle department, social security office, and numerous other places.

American allies in Europe and elsewhere are astonished to think there is even the possibility that one could vote without showing photo ID. It’s a no-brainer! Unless we want fraud in our elections, requiring a photo ID is just common sense!

In many of the Southern States, with a significant population of service-industry and agricultural sector workers earning wages at around...