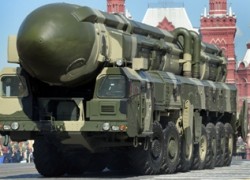 A March 11 editorial The New York Times appears to support the idea that the nuclear arsenal of the United States acts not as a deterrent to the aggressions of other nuclear powers but rather as an invitation to play hardball.

The Times cites options being considered by the “Pentagon and national security aides” that would lead to several rounds of negations with the Russians. These negotiations would incrementally cut the number of our deployed nuclear weapons to below 300. That would leave the United States with less than 1 percent of the nuclear weapons it had in 1967.

The Times refers to this race to the nuclear bottom as a “practical choice to implement [President Obama’s] strategy” to downsize the nuclear arsenal and delay or table plans to repair, replace, or build up nuclear delivery systems such as submarines, bombers, and intercontinental ballistic missiles.

The Times downplays the threats from other nuclear powers, advancing the desired goal of having no more nuclear weapons “than any potential foe, except Russia, possesses.” China, states the article, “likely has 240–300 nuclear weapons, but experts say no more than 50 are capable of hitting the United States.” The Times minimizes the threat from North Korea, saying that it “has fewer than a dozen, none with the ability to hit the United States.” The paragraph ends with the optimistic assertion that “Iran has no weapons, so far.”

The Times has made the incongruous and breathtaking implication that as international nuclear powers—enemies and allies of the U.S. alike—build up and modernize their nuclear arsenals, the only way for the U.S. to ward off nuclear attack is for President Obama to cut the nuclear arsenal until it can no longer be perceived as a threat. Perhaps the editorial board at the Times really believes that if the U.S. disarms itself, other nations will respond to its good intentions and follow suit.

The Times states, “This is President Obama’s opportunity to reshape the post-cold-war world to make it fundamentally safer. He needs to seize it.”

The Cold War era was a time of high international tensions. The Soviet Union and the U.S. were obsessed with nuclear buildup and gaining advantage as the strategic superpower. The tensions of the Cold War were indeed high, but not one incident of nuclear aggression occurred during those years. The military and nuclear supremacy of the U.S. protected the entire world from the nuclear hostilities of the Soviets and other Communist regimes.

The Times editorial writers may want to study history, as well as the natures of despots and rogue regimes, so they may better understand that a robust nuclear arsenal and a healthy missile defense shield are not invitations to play hardball but rather loud and clear messages that we will not be playing a game of nuclear chicken.

Marjorie Haun is a guest blogger for The Heritage Foundation.

"The Obama administration on Monday blocked a new Texas law requiring voters to show photo identification before they can cast...