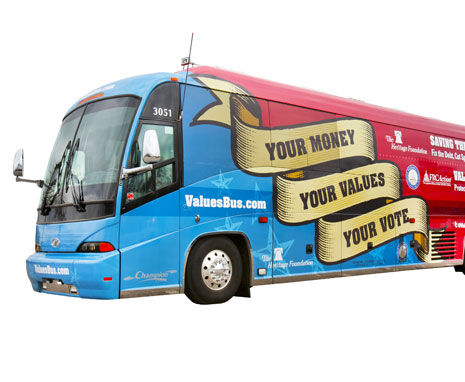 Now heading for state number 12 after nearly two months on the road, The Heritage Foundation/Family Research Council tour Your Money, Your Values, Your Vote continues rolling across America. Following a successful week in North Carolina—reaching thousands of people over 11 events—this weekend we head southwest to Arkansas.

Why are Heritage and FRC on a road trip? We’ll let recent press coverage speak for itself. Though they don’t always get it right, media outlets have followed the crowds and listened in as local and national leaders present the principles driving this nationwide effort.

Jessica Anderson of Heritage Action for America spoke with the Winston-Salem Journal, which posted a video of our stop in Winston-Salem. Jessica stated:

We’re gearing up for the 2012 election with a focus on the important issues that matter most to conservatives across America, including cutting government spending and Saving the American Dream by repealing Obamacare.

During our Sunday morning stop at a large North Carolina church, the specific policy proposals in Heritage’s budget reform plan Saving the American Dream garnered attention from the Franklin Times:

That plan calls for balancing the U.S. budget by 2021, simplifying taxes, reducing government spending and making health care affordable. “Politicians and lawmakers have pretty tough choices to make. They won’t make them unless the public is calling for it,” said Genevieve Wood, vice president of strategic initiatives at The Heritage Foundation.

For Heritage and FRC, the tour has also been about listening and amplifying the message of citizens speaking out for what matters. It’s encouraging when the media spotlights local voices who reveal better than we could what’s at stake—such as this comment from a Hendersonville Times-News story:

We need change, and we need it fast,” said Al Jones. Standing next to the bus outside the church, he pointed inside to a group of children in day care and added, “They’re the ones who are going to suffer—my grandchildren.

Our tour through Arkansas begins tomorrow with voter registration and education at Harding University, then continues with two events in Texarkana (both the city’s Arkansas and Texas sides!) as well as a few stops in the Little Rock area. In the coming weeks, look for the bus to visit Pennsylvania, Ohio, California, and Colorado.

We encourage you to share our new short video about the bus tour, and add your name to the map at SavingTheDream.org to receive updates on how the Heritage plan is progressing.

For more details on the Your Money, Your Values, Your Vote 2012 Tour including times, locations, and FAQs, visit ValuesBus.com.

Retired Jewish General to be honoured by Bangladesh

by Ranbir Singh Bangladesh became independent in 1971 after a violent and bitter war with its neo-colonial master Pakistan. The...