Talk of war with Iran is scaring investors away from Israel even though the country’s growing economy and hi-tech industry are considered a gold mine, according to the Calcalist business newspaper. 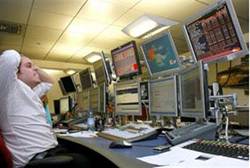 “We Israelis do not recognize the concept of risk. We live here and raise our children here. But the situation with Iran is a top priority for every investor today, Yuval Cohen, head of a top investment in Israel, told Calcalist.

Cohen responded, “We are all optimistic here, but at dinner, when you sit with investors, you hear their doubts.  We look not good. I heard them like a broken record.”

Despite the fears, all agree that in the long-term Israel is a good bet for foreign investors.

Israel boasts more companies on New York’s NASDAQ exchange than any other country in the world outside of the United States and Canada.

American hi-tech companies have gobbled up Israeli companies at a startling rate, and the New-Jersey bases Avaya  video conferencing company is set to snap up Israel’s Radvision for $225 million, Globes reported Wednesday.

An Iranian building suspected as a test site for nuclear explosions has been identified through satellite imagery by Washington think...