In the 1964 presidential elections, Republican candidate Barry Goldwater was crushed by Lyndon Johnson. 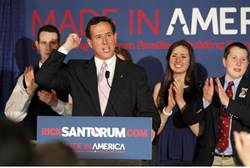 The issue of the heart recurs in 2012’s Republican nomination contest that has for all practical purposes become a two-man race between Mitt Romney and Rick Santorum –  the cerebral candidate versus the heart candidate.

Newt Gingrich has become irrelevant by failing to capture either Alabama or Mississippi, thereby losing his pretensions to come into the Tampa convention with a phalanx of solid South supporters.

The nomination contest has no runoff provision and there’s no way that Gingrich can be compelled to bow out in favor of Rick Santorum. Gingrich knows that this is his last hurrah as a politician and therefore is a he is reluctant to leave the stage, but Conservatives will now increasingly rally to Santorum in the hope of stopping Romney.

Santorum is currently the choice of the Republican heart. The New York Times CBS poll that was published this week and showed that President Barack Obama could be beaten, was also illuminating concerning the Republican candidates. To judge by the responses to the survey, one can actually say that Romney’s ability to maintain the lead represents an achievement for the front-runner, given the fact that Rick Santorum projects greater likeability and less negativity than Romney.

Santorum also appears to be more attuned to the Republican base in terms of his views, or at least how his views are perceived. Thirty-six per-cent of Republicans surveyed felt that Romney was not conservative enough, while 54% believe that he was about right. Only 11% believe that Santorum is not conservative enough and he scores a whopping 70% in the about right category.

Santorum also scores higher than Romney when people are asked who understands “the needs and problems of people like yourself?”

Romney. in addition to his appeal to moderate Republicans and upper income voters. appeals to the mind. He is still considered overwhelmingly by Republicans to be the eventual nominee and the one with the best shot of ousting Obama.

It may be in Romney’s narrow interest to have Gingrich stay in the race.

While Santorum won the two contests in Mississippi and Alabama, Romney extended his delegate lead by taking Samoa and Hawaii.

Romney, however, cannot afford to be seen as backing into the nomination. People will soon be talking of an island strategy for both harvesting delegates and parking tax free savings.  You cannot compare a presidential campaign to a football team that occasionally wins ugly. That is sports, where a fumble here or a penalty there can run against the trend of the game.

Romney should welcome a chance at going mano a mano with Santorum rather than rely on Gingrich or obscure islanders . He may never convince conservatives  that he is one of theirs, but he must at least show that he has heart.

Now heading for state number 12 after nearly two months on the road, The Heritage Foundation/Family Research Council tour Your...