Israeli-born Gilad Atzmon, who has made a career out of condemning Israel and rejecting his Jewish roots, fully identifying with and promoting the Arab position on the illegitimacy of Israel and Zionism, and affirming the most egregious of anti-Semitic allegations, has been rejected by the Arabs he advocates for. In a letter published by the PA’s Ma’an news agency Thursday, a long list of PA activists, professors, writers, and advocates from around the world said that they “disavowed” Atzmon, noting “the dangers of supporting Atzmon’s political work and writings and providing any platforms for their dissemination.” 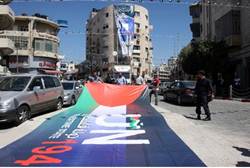 Atzmon, who is considered one of Britain’s most accomplished jazz musicians, was born in Israel and served in the IDF during war in Lebanon in 1982. Afterwards, he emigrated to Britain, where he started performing and building his jazz career, while at the same time speaking and writing about what he calls Israel’s “theft of Palestine” from the Arabs, “Jewish supremacy and racism,” and “use of the Holocaust to justify the occupation.” He has endorsed the Protocols of the Elders of Zion, and in 2005 wrote that “American Jews do control the world, by proxy. So far they are doing pretty well for themselves at least.”

Atzmon’s political work, which includes hundreds of essays published around the world, as well as several books, has been lauded by, among others, Richard Falk, James Petras, and John Mearsheimer, all of whom have been highly critical of Israel and Zionism, to say the least. Mearsheimer, who with Stephen Walt wrote a 2007 book “exposing” the Israel lobby, endorsed Atzmon’s 2011 book “The Wandering Who,” but later issued a statement qualifying that endorsement, over comments Atzmon made in the book that the Jews “persecuted” Hitler and “traffic in body parts.” Responding to criticism of him for endorsing what many in the anti-Zionist activist community called anti-Semitism, Mearsheimer wrote that although the book was filled with “interesting insights, but I do not agree with everything that he says in the book.”

Central to Atzmon’s thesis is rejection of his Judaism, from which Zionism derives its strength. To be Jewish, Atzmon claims, is to be Zionist, and one who wishes to support the Palestinian cause must deny their Jewish heritage. It is this position that the PA intellectuals reject, and in a letter issued Wednesday, they told Atzmon that his help for their cause was not needed, or wanted.

“We reaffirm that there is no room in this historic and foundational analysis of our struggle for any attacks on our Jewish allies, Jews, or Judaism; nor denying the Holocaust; nor allying in any way shape or form with any conspiracy theories, far-right, orientalist, and racist arguments, associations and entities,” the letter says. “Zionism, to Atzmon, is not a settler-colonial project, but a trans-historical ‘Jewish’ one, part and parcel of defining one’s self as a Jew. Therefore, he claims, one cannot self-describe as a Jew and also do work in solidarity with Palestine, because to identify as a Jew is to be a Zionist. We could not disagree more.

“Indeed, we regard any attempt to link and adopt antisemitic or racist language, even if it is within a self-described anti-imperialist and anti-Zionist politics, as reaffirming and legitimizing Zionism… It leaves one squarely outside true solidarity with Palestine and its people.”

Talk of war with Iran is scaring investors away from Israel even though the country’s growing economy and hi-tech industry are...