Deputy Foreign Minister Danny Ayalon said on Wednesday that Israel wants to achieve peace with its Arab neighbors, but stressed that peace cannot come at the price of Israel’s existence. 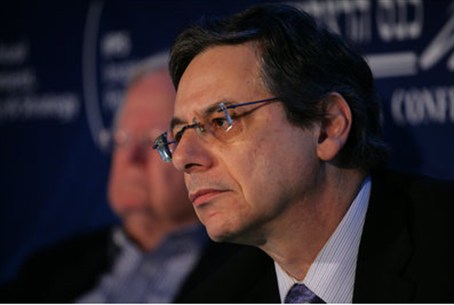 Speaking with Arutz Sheva on the sidelines of the 12th Annual Herzliya Conference, Ayalon said, “We have to be very firm in our demands for our security, for recognition and we also need to see Palestinians giving up their senseless demands for preconditioned negotiations and all kinds of excuses.”

He added that the Arab Spring has proven wrong the claim that the “Palestinian problem” is central to the stability and to the future of the Middle East.

He said the conflict “has to be solved between Israel and the Palestinians without preconditions and without any intervention and interference from outside.

Ayalon also addressed the strategic value of Israel to the United States and stressed that Israel is extremely important to the U.S.

In Case You Missed It:  CNN Trying To Do Damage Control After Being Called Out As Liars By Joe Rogan (VIDEO)
Posted in Israel, Terrorism and tagged Freedom, Islam, Israel, Jihad, Palestinians, Terrorism, United Socialist States of America.

Protocols of the Elders of Zion Exposed, in Farsi

The Lie That Wouldn’t Die: The Protocols of the Elders of Zion, written by Hadassa Ben-Itto, which seeks to expose...