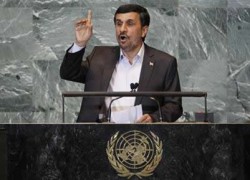 How to handle Iran? Writing in The Washington Post, columnist Fareed Zakaria complains that “Krauthammer, the Heritage Foundation, the American Enterprise Institute and others denounce containment and deterrence and would lead us instead to a policy that culminates in a preventive war.” This summary of Heritage writings about dealing with the threat of a nuclear-armed Iran prompts a bit of head scratching—if Fareed actually reads anything Heritage writes.

First of all, if you click the link to “Heritage” in his blog post, it takes you to a speech given at Heritage by Michael Rubin. In fact, clearly on the page it states, “Michael Rubin, Ph.D., is a Resident Scholar at the American Enterprise Institute for Public Policy Research.” Oops!

Zakaria might have linked to our most recent statement on how to deal with Iran, which rejects the notion of “preventive war.” Instead, the piece emphasizes all that can be done short of war to turn back Iran’s nuclear program. What the Heritage position does state is that in the end, the U.S. has the right to exercise its inherent right of self-defense, a right which belongs to any nation. That is very different from the concept of preventive war.

Now, Heritage has written in the past that containment might not work well for dealing with Iran. Guess Fareed missed that one. That paper goes to great length to explain how any strategy, including containment, has to be measured against the conditions faced at the time. What works in one case might not be appropriate in another.

Zakaria also glosses over the fact that nuclear deterrence is really only good for one thing—deterring nuclear war. In practice, since both sides have nuclear weapons, both sides find they can do a lot of mischief below the nuclear threshold—e.g., if Tehran really pulled off a terrorist attack inside the United States, would Washington nuke Tehran? Doubtful.

Does Fareed really think an already dangerous and aggressive Iran (see recent meddling in Azerbaijan) is going to be less dangerous parked under a nuclear umbrella? He should remember Mumbai. Would Pakistani intelligence have allowed the brutal assault on India to happen if they didn’t have a nuclear checkmate to keep India from whacking them back? Zakaria, be careful what you wish for.

Then there is the unmentioned issue of what happens if countries like Turkey, Saudi Arabia, and Egypt decide they want their own nuclear deterrent against Iran. When we tested that proposition, we found that it was very hard to avoid conflict in a proliferated setting. Unlike deterrence in a classic standoff of us versus them, when several independent actors have nuclear weapons in a crisis (because you have to judge the actions of multiple independent actors at once), it is very hard to keep the peace. It winds up looking like six soccer teams on the field at the same time playing against each other.

Zakaria may think differently, but he has to do better than name-calling. Rather than throwing rocks, he ought to do his homework and then engage in a serious dialogue about how to deal with one of the world’s most dangerous nations.

More than two thirds of young men from Samaria who join the IDF serve in combat units. IDF statistics show...