As more than 15,000 runners from 50 countries prepared for the Jerusalem Marathon which was held on Friday, Hamas was busy organizing a protest against it. 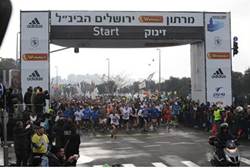 According to a report in the Ma’ariv newspaper, Hamas’ Gaza-based Ministry of Sports organized a demonstration against the famous sportswear company Adidas on Thursday, in protest of the sponsorship it gave the Jerusalem Marathon. During the demonstration, participants burned shirts with the Adidas company logo.

The Arabs’ anger, the Ma’ariv report explained, is over the fact that the runners passed through the Old City in east Jerusalem, a fact which, in the protesters’ eyes, is a reflection of Israel’s continued policy of “Judaization” of Jerusalem.

The protest, which was entitled “Action to support the Al-Aqsa Mosque and to Boycott Adidas,” began with a soccer match between two youth teams from Gaza.

After the game, the protesters gathered shirts with the Adidas logo, under which the words “boycott Adidas products” were written, and set fire to them.

The event was attended by senior department heads in Hamas’ Sports Ministry. The Ministry’s director of public relations was quoted by Ma’ariv as having said that the purpose of the protest was “to call the world’s attention to what is happening in occupied Jerusalem.”

The report said that earlier this week, Hamas’ Sports Ministry sent a letter to the Adidas company in which it demanded that it reverse its decision to sponsor the Jerusalem Marathon.

Earlier this week it was announced that Arabs are planning a Global March to Jerusalem, an initiative that aims at getting over one million Arabs and their supporters to attempt to infiltrate Israel’s borders on March 30th. A spokesman for the march said this week the initiative “demand[s] freedom for Palestine and its capital Jerusalem.”

The Meir Amit Intelligence and Terrorism Information Center (ITIC) has presented information that Iran is behind the initiative and openly supports it.

In Case You Missed It:  Greg Gutfeld Beats All Other Late Night Hosts While They Do Hyped Special On Climate Change
Posted in Israel, Terrorism and tagged Freedom, Hamas, Islam, Israel, Jihad, Muslims, Palestinians, Terrorism.

More to the Story on Nuclear Power and Cheap Natural Gas

Two major financial news publications, the Economist and The Wall Street Journal, published major articles in the past week arguing...