The Palestinian Authority declared a Baptist Church in Bethlehem to be unlawful and said that it will no longer receive rights as a religious institution, Algemeiner reported. 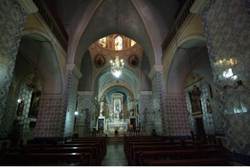 This decision comes a week after Prime Minister Salam Fayyad told an audience of Evangelical Protestants that his government respected the rights of its Christian minorities.

“They said that our legitimacy as a church from a governmental point of view is not approved,” said an assistant pastor at the First Baptist Church. “They said they will not recognize any legal paper work from our church. That includes birth certificates, wedding certificates and death certificates. Children are not even considered to be legitimate if they don’t have recognized paperwork.”

The messianic church was subjected to an ongoing onslaught of attacks by Arabs during the height of the First Intifada.

At a recent gathering of Evangelical Protestants, Prime Minister Fayyad said that ensuring the rights of the Christian minority to access their holy sites is, in part, what it “means to be a Palestinian.”

Pastor Reverend Naim Khoury noted, however, that animosity towards the Christian minority in areas controlled by the PA continues to get increasingly worse.

The Algemeiner explained that the “church’s message of reconciliation flies in the face of the propaganda that permeates Palestinian society. Muslim clerics routinely offer up anti-Semitic rants on PA television and so-called peace activists have turned the concrete sections of the security barrier in Bethlehem into a canvas for their propaganda, which in some instances proffers a troubling fatalism to its viewers.”

Rev. Khoury noted, “The First Baptist Church in Bethlehem has demonstrated its value to the community over the years and proven itself to be a law-abiding church.” He said he will speak to members of the U.S. Congress to draw attention to discrimination that is occurring in Bethlehem, perpetrated by the PA against the Christian minority.

“We did let them know that we’re not going to go quietly on this. Our church deserves the right to be equally recognized amongst all the other recognized denominations in the PA.”

After Judea and Samaria were restored to Israel in the Six-Day War, the Israeli government opened up churches and holy sites, reversing the policy of Jordan, which closed all Jewish and Christian holy sites during its occupation after the War for Independence in 1948.

In Case You Missed It:  After throwing them in covid quarantine camps, German government also STRIPS prisoners of compensation payments to bankrupt them
Posted in Israel, Terrorism and tagged Freedom, Islam, Israel, Jihad, Judea and Samaria, Palestinians, Terrorism.

Resettling the Mujahedeen-e Khalq of Iraq