There is no realistic way for Israel to put an end to terror attacks from Gaza, Hof Ashkelon Council head Yair Farjoun said this week, speaking to Arutz Sheva’s weekly magazine B’Sheva. “People talk about bulldozers and dealing a fatal blow, but we know that isn’t serious and isn’t practical,” he said. 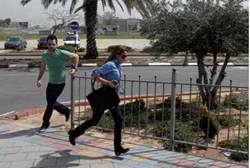 “Instead of wasting energy on anger that has no practical outlet, we need to focus on development, on action, on our positive way of life,” he said.

Israelis must focus on Israel, not Gaza, he opined. “Our outlook needs to be a vision that builds, creates, educations… If those on the other side of the fence choose to live differently, let them live in the muck they create.”

Those living in Gaza will not give up terrorism, Farjoun said. “We know they won’t give up, and there won’t be peace in our time.” When asked if he sees his view as one of despair, he answered that he sees it as a view that allows Israel to move forward. “From the understanding that the battle will continue, comes the understanding that our task is to take a deep breath… to understand our purpose in staying in this land, and our goals here.”

‘This is Our Land, We Have No Other’
The response to terrorism must include teaching young Israelis why they live where they do, Farjoun declared. “The more we teach the youth that this is our land and we have nowhere else to go, the more our endurance will grow,” he said.

“If the terrible trend toward post-Zionism that is taught in some universities were to continue, G-d forbid, people would ask ‘why stay here,’” he added. “Those on the kibbutzim would go to Ashdod, to Rishon L’Tzion, but they would be attacked there as well.” Even leaving the country would not help, he added, “Where would we go? Turkey? The United States? Who can guarantee that things would stay quiet there?”

Some say that Israel would react differently to rocket attacks if Gaza terrorists were able to hit Tel Aviv and not only the south. Farjoun disagrees. “There have been difficult incidents in every city in Israel. Buses exploded and we were powerless to respond for more than a year, until Operation Protective Shield. Our entire land has been hit by terror,” he stated.

Fear for Katif Expellees
Farjoun expressed concern for the safety of those in his region who formerly lived in Gush Katif and are now living in caravans. “It pains me. The state says they’ll be in permanent homes in two years, but this is already the seventh year [since the Disengagement].”

In order to reach the large concrete pipes that are their only form of protection, residents of the temporary caravan communities must leave their homes and run outside, he explained. “Sometimes at five in the morning, sometimes at two at night, sometimes they have to run downstairs half asleep,” he said.

Israel’s Destiny – Wisdom, Creation
Ultimately, Farjoun sees a good future for Israel. “Our destiny is creativity, quiet and productivity. We export wisdom… the Jewish brain exports its understanding to the whole world.”

Deputy Foreign Minister Danny Ayalon said on Wednesday that Israel wants to achieve peace with its Arab neighbors, but stressed...