“On the ill-fated Sunday, 16 civilians were killed in Afghanistan in two villages Alkozai and Balandi. Nine children and three women, and injured five others as someone in a NATO forces uniform opened fire on houses in Panjwai district. 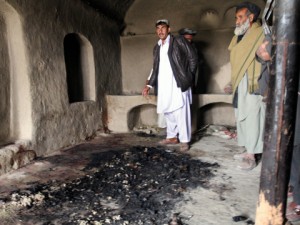 Bodies were piled up and burned in this room

Staff Sergeant Robert Bales is in custody for the acts of that night, immediately send back to the United States. Robert Bales was a loving husband, a good father, a patriot with many awards, and now a mass murderer?

There are a number of people out there who say it’s not Bales fault. That’s because they say Bales suffers from Post Traumatic Stress Syndrome, and saw his friend’s leg get blown off the day before but, is that’s somehow admissible?

What we are not being told is the conflicting reports on the events of that night. The local Afghanistan Pajhwok Afghan New reported by Afghan lawmaker Hamizai Lali said there were 15 to 20 NATO soldiers, who executed the brutal killings.

They reported, “We closely examined the site of the incident, talked to the families who lost their beloved ones, the injured people and tribal elders,” he said.

Bringing even further question is Afghan President Hamid Karzai slammed the U.S. this weekend for sticking to its story that Staff Sgt. Robert Bales, acted alone, shot and killed 16 innocent civilians. He added the attack lasted one hour involving two groups of American soldiers in the middle of the night last Sunday.

The villages are one and a half kilometre from the American military base. Afghans are convinced that one soldier cannot kill so many people in two villages within one hour at the same time, they say it is impossible for one man to kill 16 people in a house and then move all their bodies into one room before setting them alight. Afghan officials alleged the 16 civilians, most of them children and women, have been killed by two NATO groups.

The Parliamentary Afghan Commission has also established new details: carnage in Kandahar, an act of revenge from an earlier event. The commission alleges shortly before the tragedy, an American armored vehicle was hit a bursting charge. The entire crew was killed. According to eyewitnesses, the military that day vowed to revenge on the inhabitants of the nearby settlement from that act.

Was Bales the fall guy, as he was opposed to the offensive/massacre and tried to say something or stop it, so he was chosen, we don’t know. What we do know it not to jump to conclusion so quickly as we will further learn of the events of that terrible night.

Unfortunately, this may just be the tip of the iceberg in terms of what has been happening in Afghanistan with civilians. You put a bunch of angry young men fighting unseen guerrillas in a country like Afghanistan, and its a recipe for disaster. Look at Abu Gharib, the prison in Iraq, where large scale torture by US troops on prisoners took place and President Bush was directly blamed by many. Is the Obama administration trying to save face in this election year by not disclosing all the events of that tragic Sunday?

We do know by the way the Obama administration has handled the case so far has raised some questions. Such as why they waited nearly a week before revealing the suspect’s identity. Legal experts found the delay unusual given the high-profile nature of the case.

In Case You Missed It:  AZ forensic audit results show SYSTEMIC fraud, faked votes, more than 5X the margin of "victory" from just one county out of the entire state ... prepare for CRISIS THEATER distractions
Posted in Freedoms, Terrorism and tagged Afghanistan, Crime, NATO.

President Obama famously declared in this year’s State of the Union: “I’ve approved fewer regulations in the first three years...