Security officials threatened on Friday that an escalation of rocket fire by terrorists in Gaza will result in a “super escalation” by the IDF. 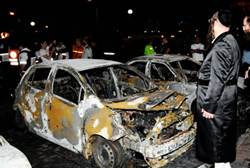 Speaking to the Yisrael Hayom newspaper, a security official said, “We cannot tolerate this fire over time. The citizens of Israel do not care who shoots at them. They care that they are being shot at.”

A senior official in the Israeli Air Force told the newspaper, “The results of an operation in Gaza will have an impact on the doctrine of the Air Force.” The official added that “the enemy understands that Israel has the Iron Dome and in the next round he will look for a different Achilles’ heel.”

The officials made the comments following the recent wave of escalation, during which Gaza terrorists fired more than 200 rockets at Israel over four days.

Despite an Egyptian-brokered ‘ceasefire’ announced earlier this week, terrorists continued to fire rockets at Israeli territory even on Friday.

A Kassam rocket which was fired from Gaza at southern Israel on Friday afternoon landed in an open area in the Eshkol Regional Council. There were no physical injuries or damage.

A Kassam rocket was also fired from Gaza towards Israel overnight Thursday and exploded in an open area in the Eshkol Regional Council.

At least five rockets and missiles were fired from Gaza into Israeli territory throughout the day on Thursday, including a Grad missile fired at Ashdod on Thursday evening. While the Iron Dome system successfully shot the missile out of the air before impact, the attack caused concern among local officials and led to the closure of schools across the south.

On Thursday, when schools were open, a rocket hit near a school in Ofakim. No children were wounded in the attack.

Be’er Sheva Mayor Rubik Danilovich made it clear on Thursday that “so long as there is shooting on the city of Be’er Sheva there will be no school. I maintain constant contact with the Home Front Command, I hear their assessments and professional guidelines and recommendations, but ultimately I take full responsibility for the safety of the students of Be’er Sheva.”

Danilovich added, “It’s unthinkable that you could be talking about routine and the firing of missiles continues as a fact of life. This cannot happen. We’ve created an absurd situation in which there is no quiet in southern Israel, and Gaza is quiet. Israel must make military action to eradicate this terrorism. The mayors have given the defense establishment and the Prime Minister the full backing to carry out any actions required to stop the shooting at the south. If we do not act now, we’ll go back for another more difficult and more violent round.”

Meanwhile on Friday, the Islamic Jihad claimed it has rockets that can reach Tel Aviv.

A member of the terror group‘s Quds Brigades told AFP they were ready to expand the reach of its rocket fire “beyond the Israeli town of Ashdod.”

“If the occupation targets any leader of any Palestinian group whatsoever or any citizen, the Brigades will respond with force and expand the reach of the response beyond Ashdod,” he said.

“As long as they fire, it isn’t over,” Yaalon said. “Anyone threatening us is risking his life. We will retaliate until they beg us to stop. They have to realize that the consequences of the rocket fire are not worth it.”

Yemini Terrorists Assassinate US Teacher; Yemen in Disarray Due to Arab Spring

Two terrorists on a motorcycle assassinated an American teacher Sunday. The victim’s name has not yet been released. He was...