“If I ever see this girl, I will kill her. That’s a promise.” 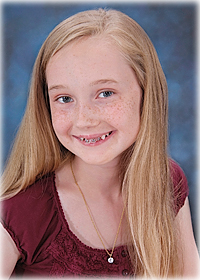 Wake up America. The voices that preach tolerance are turning violent. This time the target is an innocent young girl, Sarah Crank, who testified before the Maryland Senate Judicial Proceedings Committee in support of traditional marriage.

The calm, truthful testimony of a 14-year-old minor – without profanity or harsh language – generated vulgar attacks, threats of violence and even death wishes divulged on numerous pro-homosexual websites, blogs, and comment entries. In fact, pro-homosexual activists unleashed a campaign of harassment against the Maryland family, including a call to have the mother’s parental rights revoked for simply encouraging her daughter to defend the reality of marriage between one man and one woman.

“And now everyone knows her name, so hopefully she will feel what its like to be harassed and bullied…” reads a comment posted on LGBTQNation.com

From YouTube: “My god I hate people like this. Most (not all) Americans are [expletive] retards. If I ever see this girl, I will kill her. That’s a promise.”

Other entries: “Her parents should be exterminated.”

“Kill this child and his [sic] parent, for my 11 birthday would be a wonderful gift, thanks.”

“Her belief is hurting other people. I will attack her as much as I please.”

That is only a small sample. The vitriolic tone of over 2,600 comments posted on The Huffington Post alone, reveal how the “tolerance” promoted by the homosexual movement is anything but tolerant, nothing more than an empty slogan to silence most Americans. In fact, hundreds of additional comments posted across the blogosphere demonstrate just how willing pro-homosexual activists are to deny traditional marriage supporters their freedom of speech.

Here’s the text of the audio recording: “Hi, I’m Sarah Crank. Today’s my 14th birthday, and it would be the best birthday present ever if you would vote ‘no’ on gay marriage. I really feel bad for the kids who have two parents of the same gender. Even though some kids think it’s fine, they have no idea what kind of wonderful experiences they miss out on. I don’t want more kids to get confused about what’s right and okay. I really don’t want to grow up in a world where marriage isn’t such a special thing anymore.

The teenager’s sixty-second testimony points out two things: First, homosexual behavior is not inborn, but a choice. And second, many of those who have fallen into homosexual sin can and do change.

May God protect and bless this brave Maryland girl and her family for speaking up in defense of God-ordained marriage, and may He protect America from the homosexual agenda and its violent dictatorship of tolerance.