When the EU passed its budgetary stability pact, it wanted to convey the impression that sanctions against offenders would kick in automatically and the measures would be applied evenly with no favoritism. 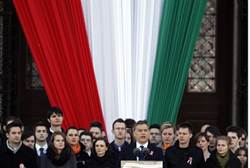 The current European Union standoff with Hungary is exposing Brussels to charges of double standards and even unwarranted intervention.

Last Tuesday European Union finance ministers suspended half  a billion euro to Hungary as part of the cohesion funds. Under the cohesion funds, designed to equalize conditions among the member states, the poorer states receive assistance from Brussels, and this was a major incentive behind the East European expansion of the European Union.

The official reason is that Hungary is failing to keep its budget in check and therefore is in breach of the fiscal pact that it recently signed.

The Hungarian government, with its overwhelming parliamentary majority, is claiming that Hungary is being singled out because the European Union opposes Hungarian legislation on political issues and is therefore using the financial lever to bludgeon Hungary into submission.

After alluding to the EU as colonialists, the Hungarian Prime Minister then compared the EU bureaucracy to the Soviet apparatchiks who meddled in Hungarian affairs. “Hungarians write their own constitution and don’t need unsolicited help from foreigners who wish to control our actions,” said Mr Orban. “We very well know the nature of unsolicited help from comrades, and we recognise it even if it’s not wearing uniforms but well-cut suits,”

Orban accused the European Union of double standards: “As a European nation, we demand equal treatment. We will not be second-class European citizens.

“Our rightful demand is to have the same standards apply to us, which apply to other (EU) countries,” Mr. Orban said.

Orban was apparently referring to the European Union’s leniency towards Spain, that will not have to cut its deficit as deeply as it was originally told to do. Spain benefited greatly from joining the European Union and has always been a good European, quick to approve European treaties. Its economy had been in good shape till the housing construction bubble promoted economic tailspin.

Hungary, in contrast, has always been considered problematic in Brussels.

Nevertheless, Hungary has its allies within the EU, notably Austria and Germany. Both countries have historic ties with Hungary – and more important, their banks are heavily invested in Hungary. An irreversible blowup with Budapest could inflict real financial damage. They therefore insisted on compromise, under which Hungarian measures to rein in the deficit will lead to an unblocking of the funds in June.