On Wednesday evening, March 14th ,over 30 protestors representing both Jewish and human rights organizations gathered in front of the Jewish Community Center on Manhattan’s upper west side to express their outrage over a forum entitled “Combating Islamophobia.” 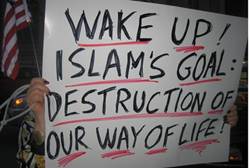 Moderated by former first daughter Chelsea Clinton, the panelists included Rabbi Marc Schneier, co-founder of the Foundation For Ethnic Understanding, which fosters “twinning” programs between mosques and synagogues and Imam Shamsi-Ali, the spiritual leader of the Islamic Cultural Center of New York and the chairman of the Al-Hikmah mosque in Astoria.

Holding aloft signs and banners reading “What Are Muslims Doing for Peace???”, “Burning Churches, Honor Murdering Women. Where is the Muslim Protest?”, “Sharia Equals Death”, “Since 9/11, Radical Islamists Committed 11,961 Attacks, Killed 75,038, Injured 115,255”, “Wake Up! Islam’s Goal: Destruction of Our Way of Life”, “Stop Billions of Saudi Oil Monet Funding Worldwide Radical Islamic Intolerance and Terror”, “The Right of Jews to a Jewish State in Israel,” “The Right of Muslims to Convert to Other Religions,” the protestors took aim at what they perceived to be the hypocrisy that this event represented.

Narain Kataria, the President of the Indian American Intellectual Forum, declared, “We should not be talking about Islamophobia but about whether Islam is a religion of peace. This should be debated all over the country. We Hindus have suffered at the hands of radical Islamists. I believe that somehow the organizers of the conference on Islamophobia have been either heavily funded or misguided by Muslim organizations into believing that Islam if the religion of peace.”

Joining Kataria was protestor Dr. Arish Sahani who declared, “Shame on our intellectuals! Why don’t they teach their students that for 1400 years Muslims have been persecuting non-Muslims?”

Helen Freedman, the executive director of Americans For a Safe Israel (AFSI), said, “The JCC, in sponsoring ‘Combating Islamophobia’, is suggesting that it is un-American to fear Islam. Our liberal upbringing causes us to be offended by the accusation that we are racist when it comes to Islam, but isn’t there ample justification for concern about a political agenda disguised as a religion which promotes hatred of infidels and women? The radical, militant, hate-filled Islam that has spread across the world, butchering and maiming millions in its path, deserves to be feared and eradicated.”

Speaking of the recent controversy that has swirled around New York City Police Commissioner Ray Kelly for authorizing police surveillance of mosques in the New York area and for using the documentary entitled “The Third Jihad” as a training tool for his department, protestor Marion Dreyfus, addressed the gathering passionately, “Commissioner Kelly is defending us. He should not be castigated. He should be admired and supported.”

(On the JCC panel, Imam Shamsi Ali, a very soft-spoken Indonesian, called for Muslim consultants to supervise the training materials for the NYPD where terrorism is concerned).

Dr. Marvin Belsky, of the Human Rights Coalition Against Radical Islam told those gathered, “There can be no legitimate partnership between Muslims and Jews until there is tangible evidence that the greater Muslim community supports rights for all religions, rights for women, rights for converts, the right of Jews to inhabit and maintain a Jewish state in Israel, and the right of free speech.”

According to columnist and protestor, Marion Dreyfus, “Two supporters of Islam, one wearing a crucifix, and one presenting himself as Jewish, stood a few feet away holding magic-markered cardboards, and tried to convince passersby that non-existent ‘Islamophobia’ is a bugaboo we must all foreswear. The ‘Jewish’ gentleman asserted he had read the Koran ‘five times’ and found no racial bigotry or desire to kill non-Muslims.”

The woman wearing the cross would not engage in discussion at all, repeating that her reason for being there was just to hold the sign.

It is not known if the crowd was persuaded, as one self-professed Muslim woman confided inside the JCC that “almost all Muslims are peaceful,” and that “only a few ‘nutters’” exist to “give the rest a bad name.”

Escalation Will Be Met with ‘Super Escalation’

Security officials threatened on Friday that an escalation of rocket fire by terrorists in Gaza will result in a “super...