Two terrorists on a motorcycle assassinated an American teacher Sunday. The victim’s name has not yet been released. He was murdered in Taez, a central Yemini city, according to the region’s governor, Hamoud al-Sufi, CBS and the Associated Press reported. 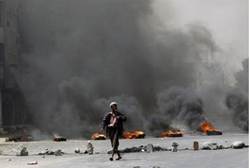 The terrorist group behind the murder was not identified. Al Qaeda already has taken over much of the southern party of the country as the central government’s authority continues to collapse following the ouster of president Ali Abdullah Saleh following the Arab Spring uprising last year.

Local tribesmen last week kidnapped a Swiss woman who was working as a researcher, and Yemini security forces are looking for a suspected  Al Qaeda terrorist. Tribesmen denied that terrorists kidnapped the woman.

Kidnappers often use hostages as bargaining chips for cash or for the release of jailed terrorists, and most of them are released unharmed after an agreement.

The kidnap victim was unofficially identified as 34-year-old Sylvia Abrahat, who telephoned a colleague to say that her captors demanded the release of prisoners.

When the EU passed its budgetary stability pact, it wanted to convey the impression that sanctions against offenders would kick...