Elite French police are engaged in a gunfight this moment at a four-story building with the suspected Toulouse murderer, who is of Algerian origin and is linked with Al Qaeda. 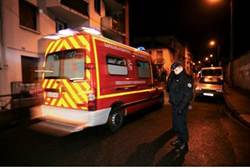 Emergency vehicles block off neighborhood of suspected killer in Toulouse

One police officer suffered serious wounds, and two others were wounded lightly. The suspect is a 24-year-old Muslim who French officials said has traveled to Pakistan and Afghanistan. Police brought his mother to his apartment building, but she said she was unable to convince her son to surrender. The apartment is relatively close to the Otzar HaTorah Jewish day school, where the terrorist shot his vicitms.

The suspect is armed with a high-caliber rifle, and he announced he would not surrender alive. Simultaneously, police searched for and arrested the brother of the suspect, who reportedly was in the house when the raid began.

He told authorities that he and his brother carried out the murders of the three French soldiers in Montauban and of the Jews at the Toulouse day school to protest the deaths of Gaza terrorists and France’s involvement with the war on terror in Afghanistan.

French Interior Minister Claude Gueant is at the scene of the raid, which began a few minutes after 4 a.m. Israel time, as the neighborhood was sealed off. He said that the police want to capture the suspect alive so he can stand trial, but other French sources said that police may decide to kill the man and end the operation.

Terror has also hit Paris, where an explosion was heard at a foreign embassy. No injuries were reported.

France is in shock over the serial murders of French soldiers and Rabbi Yonatan Sandler, his two young sons and the little daughter of the principal of the Otzar HaTorah school in Toulouse on Tuesday. Their bodies have been flown to Israel, where they are to be buried in Jerusalem at 10 a.m. Wednesday.

French President Nicolas Sarkozy commented, “When you grab a little girl to put a bullet in her head, without leaving her any chance, you are a monster. An anti-Semitic monster, but first of all a monster.’

Beinart claims that the only way of “oppos[ing] the forces that threaten Israel from without,” is to “oppose the forces...