Just a week after Iranian president Ahmadinejad’s called yet again for Jewish Genocide, a French Muslim rode a motor bike into a school yard full of playing children this crisp spring morning and started shooting. The victims crimes, being Jewish. 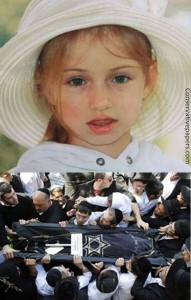 Bringing back memories of Beslan in Russia where Islamist choose to snuff out hundreds of Children lives, merely because they were not Muslims. The Beslan child slaughter showed us just how far Islamists will go in their conquest of the civilized world to impose Islam. The thought of antisemitism and acts of Nazi Germany come to mind.

There was a time when Jewish children were hunted down and killed in France. Their killers believed themselves to be members of a superior group that was destined to rule the world and enslave or exterminate members of inferior groups. Jewish people living in fear for their lives, to only relive the horrendous acts of the Nazis only 7 decades later under the massive immigration of Islamist into Europe and North America.

What was then is now again. The occupying army doesn’t wear uniforms, it wears keffiyahs. It doesn’t speak German, it speaks Arabic. It doesn’t believe that it is superior for reasons of race as much as for reasons of religion. It does not view all others as Untermenschen, but as infidels. It looks forward not to a thousand year Reich, but to a thousand year Caliphate.

Mohammed Merah the Muslim murderer of these school children did not chase down a French-Jewish seven-year-old girl, put a gun to her head and pull the trigger because he came from an economically depressed area or any of the other media spin. He was only doing what Muslims had been doing to non-Muslims for over a thousand years. He didn’t do what he did because he was “radicalized”, he did it because he became a fully committed Muslim.

In fact Merah was so proud of his unspeakably evil work that he uploaded sickening video to the Internet showing him executing a helpless, terrified 8-year-old girl, and numerous Muslims on the Arabic blog commended him in the comments for his ‘good work’ (sic).

The video shows Mohammed Merah is seen yanking the young terrified Myriam Monsenego by her hair — then firing a bullet into her head while he holds her, taking her young life all too soon, why because she was Jewish.

Does the Media help? Right after the school shootings the left leaning Associated Press reported that the manhunt was focusing on three paratroopers expelled from their regiment who had neo-Nazi sympathies, no mention of Muslims. Left-wingers quickly jumped on the attacks to proclaim that it was white right-wingers at work.

The anti-Israel, left-wing UK newspaper The Guardian quickly announced that “the shooting has already sent tremors through France’s presidential election. The first to say what was on everyone’s mind was not the Socialist challenger François Hollande but the centrist François Bayrou. He said the killings were the product of a sick society, with politicians who pointed the finger and inflamed passions.” In other words, it was conservatives in France who were responsible, even though neo-Nazism is a leftist phenomenon. Once again the delusional denial of the left, Islam is not a religion of peace!

A week before the attack in France took place one pro-Palestinian activists were caught spreading false images, including a particularly evocative photo of a bleeding girl in her father’s arms. The girl, it turns out, was killed in an accident, not by Israel. The liberal media picked this false story up and promoted the false Islamic propaganda causing further hatred toward Jews.

It’s not Neo-Nazis that are the threat to Jews today. It’s the new Nazis and the old Nazis (Muslims) who were rounding up Jews into ghettos and murdering their children long before a thousand years before Hitler was even born. The Neos are pathetically longing for the return of a genocidal state that isn’t coming back, while the Muslims are actually working to bring back their genocidal state. They are doing it in Egypt, in Libya, in Pakistan and in England, France and Spain.

Muslims have hated Jews before the telephone, the telegraph, the steam engine, gunpowder, movable type and paper currency. And now, surrounded by smartphones, credit cards and jet planes, they still hate them. That simple undeniable fact is denied by government, in every university and in every center of culture. Every one of those liberal deniers has blood on his or her hands.

We are witnessing Jew-hatred among muslims in Norway, Jew hatred and antisemitism taken from the islamic satanism ideology’ main learning book, the Quran. (see video below)

Think the Muslims only hate Jews, think again. A report, from the Austria-based Observatory on Intolerance and Discrimination Against Christians in Europe found that 85 percent of hate crimes committed in Europe during 2011 were aimed at Christians by Muslim immigrants.

In Scotland, 95 percent of religiously motivated violence targets Christians. In France, 84 percent of vandalism is directed against Christian places of worship.

The question, as always, after every act of Muslim terror is how many more must die? How many? Because the killing will continue. It has gone on for over a thousand years. It is not about to stop now. Muslim leaders who condemn these acts do it for tactical reasons, not moral ones. They don’t believe it’s wrong to kill rebellious non-Muslims… unless the act rebounds against non-Muslims.

There is no peaceful way forward here. Carving up Yugoslavia, Cyprus or Israel will not sate the blood lust of people whose egos are fed by hate, who treat every concession as proof of their own superiority, who love nothing so much as for others to fear them. There is no peace to be had with a creed that defines peace exclusively in terms of its own dominance over others.

Islam, like Nazism, is a disease of the soul, a twin sense of superiority and victimhood possessed by the angry corner dwellers of the world, who are certain that they would rule if only it wasn’t for all the others holding them back. To understand a Nazi or a Muslim, you don’t need to learn their creeds, just stare into the eyes of a wife beater, a pedophile or any bully, and you will see that same smirk which easily transforms into outrage, the arrogant tone that turns unctuous when it is set back on its heels, the flickering eyes that are always looking at what they can’t have.

The day will, however, come when it won’t be, and then the peoples of the free world will learn what true Muslim terror really is, as the peoples of Africa and Asia, as the many other religions of the Middle East, including the Jews learned, in the day of the original Mohammed. It can also happen in the United States, at least 45 Muslim terrorist plots aimed at the U.S. since 9/11 have been thwarted. Good work—but cold comfort.

Don’t be mistaken the liberal media will do its darndest to try to separate Islamic terrorism form Islam. To Liberals, Islamism is never the enemy; capitalism and white people are. So long as the leftist media continues to cover for the world’s Islamists in the name of tolerance and multiculturalism, they will be aiding and abetting murder and terror against Jews, Christians and all non-Muslims across the globe.

“The terrorist who murdered 7 people in Toulouse may have been killed, but the phenomenon of extreme Islam in Europe did not die with him.”

Today, thousands of Americans gathered peacefully at over 140 capitols, government buildings and historical sites across the United States to...