U.S. Secretary of State Hillary Clinton will open the way to resuming $1.3 billion in annual military aid to Egypt, AFP reported on Thursday. 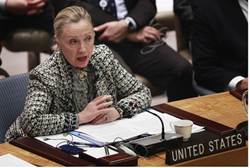 The funds had been suspended over human rights concerns, the report noted.

“Tomorrow, Secretary Clinton will certify that Egypt is meeting its obligations under its peace treaty with Israel,” AFP quoted a senior State Department official as having said in an email.

The move will free up $250 million in economic aid that had never been in serious question, the report said, noting Clinton would also waive requirements on whether Cairo is making progress towards democracy to allow for “the continued flow of foreign military financing to Egypt,” according to the official who asked to remain anonymous.

The official stressed that “on the democracy side, Egypt has made more progress in 16 months than in the last 60 years,” highlighting free and fair parliamentary elections as well as the transfer of legislative authority to the new people’s assembly.

He added, however, “Yet Egypt’s transition to democracy is not yet complete, and more work remains to protect universal rights and freedoms, and the role of NGOs and civil society.”

The annual military aid is cemented in Egypt’s 1979 peace with Israel but had come under review recently, due to Cairo’s crackdown on pro-democracy groups.

“These decisions reflect our overarching goal: to maintain our strategic partnership with an Egypt made stronger and more stable by a successful transition to democracy,” the State Department official added.

In January, Egypt barred some U.S. members of the NGOs from leaving the country and a number of them took refuge at the US embassy. The country later allowed six American and seven other foreign NGO members to leave the country after they posted bail, even if the case remains unresolved.

Senator Patrick Leahy, who sponsored the legislation that tied conditions to aid, said Thursday he was “disappointed” by Clinton’s decision.

“I know Secretary Clinton wants the democratic transition in Egypt to succeed, but by waiving the conditions we send a contradictory message,” Leahy was quoted by AFP as having said in a statement.

He added, “The Egyptian military should be defending fundamental freedoms and the rule of law, not harassing and arresting those who are working for democracy.”

Leahy said that Clinton should use the law to “release no more taxpayer funds than is demonstrably necessary, withholding the rest in the Treasury pending further progress in the transition to democracy.”

A Jewish group said on Friday that a Holocaust memorial has been vandalized in the western Ukrainian city of Lviv,...