Mitt Romney apparently believes that he has reaped a double bonus after a conversation between Barack Obama and outgoing Russian President Dmitry Medvedev at the Seoul Nuclear Conference was captured on a live microphone and broadcast the world round. 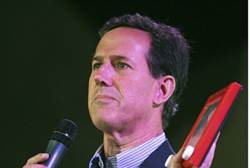 Santorum With Etch A Sketch

Medvedev had used the conference to present Russia’s objection to a NATO antimissile system stationed in Eastern Europe, unless it was jointly run by the Russians. The Russians also threatened to step up the arms race unless this plan is canceled.

Obama, who’s had a good relationship with Medvedev — although he has perhaps, like others, overestimated his real political strength and independence-  sought to reason with Medvedev.

“This is my last election. After my election, I have more flexibility,” Obama informed Medvedev. Medvedev gave a cordial message received: “I understand. I will transmit this information to Vladimir, and I stand with you.”

The message became public and went viral on the internet, including parodies. Romney has been under fire due to a remark by a campaign adviser, Eric Fehrnstrom, that Romney, once he had secured the nomination, could pivot back to the center and erase the strong conservative tones of the primary season. He could do this with the same facility as the 1960s Etch a Sketch toy that is still on the market (in fact sales at Amazon increased 15 fold after the campaign blooper).

Now those who jumped on the remark, using it to question Romney’s sincerity have to do the same for Obama.

Obama’s remarks represent more than a tactical windfall. They refer to an issue of substance. Romney, already in 2009, tasked the Obama administration for canceling the stationing of an antimissile system in Poland and the Czech Republic without receiving any commensurate concessions from the Russians.

Now he claims to be alarmed about Obama’s comment “The idea that he has more flexibility in mind for Russia is very, very troubling indeed.”

Russia is not very popular with Congress after Vladimir Putin used anti-American rhetoric to lubricate his presidential victory in an election that was not considered free and fair and whose results were tampered with.

Russia is also portrayed as the backer of Syria and Iran, or in Romney’s terms “the world’s worst actors”. This does not cut well with  either congressional or public opinion.

Romney went on to call Russia America’s number one geopolitical foe, eliciting a rejoinder from Medvedev that Romney was in Hollywood mode and was employing thinking appropriate to the 1970s.

The Romney campaign pushed back against criticism of their candidate’s position, issuing the following statement “Russia’s nuclear arsenal, its energy resources, its geographic position astride Europe and Asia, the veto it wields on the U.N. Security Council, and the creeping authoritarianism of its government – make Russia a unique geopolitical problem that frustrates progress on numerous issues of vital concern to the United States.”

It remains to be seen whether Russia becomes a serious issue in the general election campaign.