Gunmen in Sana’a kidnapped Saudi Arabia’s deputy consul from outside his residence in the southern Yemeni port city of Aden on Wednesday. 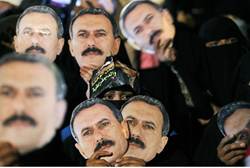 Is Saleh Behind It?

Gulf News reported this is the second time Abdullah Al Khalidi has been kidnapped — the first a few months ago in which he was robbed and released.

Reports in Yemen’s press expressed concern that the incidents were orchestrated by groups loyal to the former regime and are intended to undermine government efforts to stabilize the unrest-ridden south where a new security chief was appointed last month.

Ousted president Ali Abdullah Saleh’s decision to remain in Yemen – and continue to exercise shadow influence in the country as head of the ruling party – has raised tensions in Sana’a where opposition leaders say Saleh is seeking to undermine the transition of power agreement that ended his 33-year rule.

Police in the Aden’s Mansoura district said the gunmen snatched Abdallah Al Khalidi as he was about to get into his car and they sped off with him in another vehicle.

A Saudi foreign ministry spokesman told Gulf News, “It happened this morning. The embassy already contacted the highest security authority in Yemen. They are investigating and trying to find out the reason.”

A string of security officials have been assassinated in recent months in southern Yemen, where an al Qaeda linked group has seized territory and claimed responsibility for attacks on Yemeni troops and a US security team last month.

Kidnapping is common in Yemen, frequently in the context of regional or tribal disputes with Yemeni authorities. The victims are often held for ransom, particularly if they are foreigners.