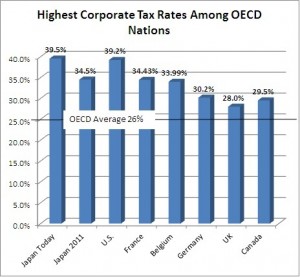 Now that Japan lowered its own taxes, the U.S. stands on top with the dubious distinction of having the highest corporate tax rates. Claims that, when you consider all the tax loopholes, subsidies, deductions and tricks, the effective rate is not really the 35% level seem less reassuring. However, if you view any tax policy that focuses upon revenue collection, you miss the entire significance of the dynamics in trade. The slogan “Free Trade” applied in real terms, means capitulation of domestic production and prosperity for the sake of maximum international return on equity. In essence, the global corporatist supersedes the home domicile country for the joy of worldwide plunder.

The United States runs away from these hard cold consequences out of some distorted motivation to become a programmed society, connected to Asian computer devices that broadcast the social destructive culture, while destroying the work ethic. Not all countries admire or model their economies accordingly. Reflected in their internal tax policies, there is a sharp contrast to that of the Uncle Sam stamp – No Longer Made in the USA.

As the country weakens and the industrial foundations crumble, the excuses multiply. What do other countries understand that evades the mindset of those who cannot grasp the supply and demand equation?

Corporate Taxes: Comparing Effective Rates You Tube offers a short lesson on tax rates. How can America survive when the tax system is targeting companies for demise? The reason many productive enterprises look to oversea locations for continuing their ventures rests upon the strategic need to escape the un-competitiveness of a tax system that favors foreign operations at the expense of domestic production.

Keeping the door wide open for tariff free imports transfers the business operations to foreign lands. This pattern guarantees that expansion and future development continues outside our nation. This new wake-up call deserves a rational response that revamps the entire tax rules.

The RATE Coalition announces in Business Wire:
“After April 1, America’s unfortunate ‘leadership’ in corporate taxation will inevitably lead to declining international competitiveness and increasing burdens on job creators,” said James Pinkerton, Co-Chair of the RATE Coalition and former White House domestic policy adviser to Presidents Ronald Reagan and George H.W. Bush. “Our corporate tax code, which is currently the world’s highest at 35 percent, will deter companies with much-needed capital from investing in America and instead they will invest and hire abroad, shifting U.S. jobs overseas.”

This conclusion is obvious, but you hear few solutions to repatriate the hordes of profits that American foreign subsidiaries shelter off shore to avoid U.S. taxes. Missing in the discussion is that companies registered to do business in our country to sell their products or services require an incentive to make their items domestically. That inducement should be lower taxes to run and invest in domestic facilities, along with the accompanying employment that flows from such operations. Conversely, there should be a substantial penalty to manufacture in foreign countries and get a first class ticket to ship their items in container vessels to flood the American marketplace.

Corporate Taxes: Advantages of a Territorial System video provides a clear explanation of an alternative method of repatriating foreign funds. This taxing option does not resolve the dramatic assault of imports based upon cheap labor. Since the decision to open relations with Red China during the Nixon era, the movement to de-industrialize America developed to perfection. Yet there are winners in this new global dominance. One familiar name if GE. The article, Who wants a higher corporate tax rate? G.E. does!, has an interesting twist.

“G.E. faces many different competitors in many different industries which makes finding an advantage that would make G.E. more competitive across all of them difficult. One such advantage can be provided through corporate taxes. G.E. has mastered the combined use of tax code loopholes and hordes of lobbyists to game the corporate tax system. As a result, the company has paid an income tax rate that averaged 2.3% over the past 10 years. If the corporate tax rate increases, it is unlikely that G.E. will give up its campaign to avoid taxation. It is much more likely that it will redouble its efforts, and judging by its past success, I doubt G.E. will end up paying what President Obama refers to as its “fair share.”

Can the same be said for G.E.’s competitors? Probably not. The vast majority of them will end up paying the higher tax rate while watching their competitor remain unscathed once again. This would be G.E.’s dream weapon, a tax rate that weakens its competitors across all industries.”

The point is that huge conglomerates, especially politically connected, that act as if they are too big to fail, discourage independent domestic businesses.

The last secret factor that a global empire seeks to disguise is that collecting corporate taxes is secondary, because of the world’s reserve currency status, to the systemic export of vibrant domestic industrial base.

The definitive consequence of having an uncompetitive corporate tax rate provides a substantial barrier for entrepreneurial activity. Tax policy can encourage the natural motivations to take risks and reward diligent work. Adverse confiscation and structural prohibitions can kill the incentive to create enterprises. Sensible reductions in all taxes can invigorate the economy.

Corporations are not people and should not enjoy the protections of constitutional personhood. However, the corporate tax rates needs to reflect the commitment to rebuild America. In the end, the consumer pays the tax. It is time to earn the benefit from goods and services produced throughout our own country.

Balancing the scales of world market commerce means that “Fair Trade” must replace the tragic consequences of the current imbalances.

In Case You Missed It:  Actor Richard Dreyfuss Tells Glenn Beck America Will Die If We Don’t Revive The Study Of Civics (VIDEO)
Posted in Financial and tagged Economy, Japan, Taxation, United Socialist States of America.

House Bill to Lock Citizens Inside the USA

A frightening bill is on the table proposed by ultra leftist California Democrat Senator Barbara Boxer, her bill Senate Bill...