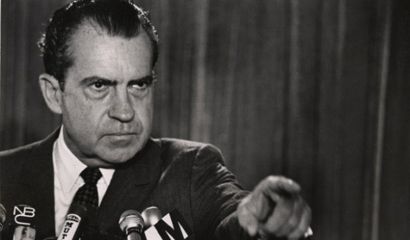 About Iran, that is.

We face some extremely serious problems today in the foreign policy realm. But now we face a uniquely serious threat from Islamic Iran. They are belligerent. They sponsor terrorism and violent repression everywhere they can, currently on display in the bloodbath in Syria. Far, far worse, they seem to be getting close to having a nuclear bomb. They have promised to use that bomb on Israel right away, and Israel cannot permit that. There can be no second Holocaust. But Israel is restrained by the U.S.’s caution and by the long distance to Iran from Israel.

I keep thinking in this context about my old boss and friend, Richard M. Nixon. Obviously, he had serious problems on the domestic side. But in foreign affairs, he was a wizard… got our prisoners back from North Vietnam, ended the war there, opened relations with China that basically encircled Russia and ended the Cold War, signed the first strategic arms limitation treaty with the Soviet Union.

As he said he would do, he left us with “a generation of peace.”

What would RN do about Iran? Well, he’s been gone now for eight years, so it’s just an educated guess, but here it is.

I think he would do the same now. He would say to Israel, “Look, you have an existential threat. You are our closest ally on the planet. We will let you use our refueling apparatus to get you to the nuclear bomb making sites in Iran. We will let you use our super satellite imaging to find the right spots to hit. We will lend you our superb anti-ground to air missile defense systems. Not only that, but we will let the world know we are doing this. The Europeans will complain, but they always complain. We won’t be pushed around by the Mullahs and we won’t let you be destroyed. If show and tell doesn’t work, we’ll be behind you in the UN after you do the bombing.

And that might just do it. Richard Nixon made many mistakes, but he was a superstar in war and peace. What would Richard Nixon do? What makes for peace in the long run, which is sometimes action in the short run.

Or, I could be wrong.

Resolved, That Barack Hussein Obama, President of the United States,be indicted for high crimes and misdemeanors and that the following articles of Indictment be exhibited to the United States Senate:

By PETER PATON Resolved, That Barack Hussein Obama, President of the United States,be indicted for high crimes and misdemeanors and...