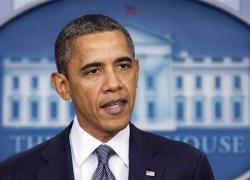 Although the Supreme Court Justices are tight-lipped, most everyone else has condemned President Obama for the attack he launched at the judiciary on Monday.  Even the Washington Post editorialized that “the comments strayed perilously close to a preemptive strike on the court’s legitimacy.”

On Monday, Obama – who often is described as a former professor of constitutional law –  made comments that demonstrated little knowledge of the concept of judicial review, while demonstrating great contempt for proper separation of powers.  Obama stated that to find his administration-defining health insurance legislation as unconstitutional would be an “unprecedented, extraordinary step” and a foray into judicial activism.

On Tuesday, the President attempted to revise his statement.  His comments were actually an entirely new, and equally inaccurate, critique.  Obama claimed that “we have not seen a court overturn a law that was passed by Congress on [an] economic issue, like health care” and that it dates back to the case of Lochner v. New York, decided in 1905, but, according to Obama, was a “’30s, pre-New Deal” case.

Obama’s Lochner reference was way off. And this isn’t the first time that he’s made that mistake. Constitutional history is not Obama’s strong suit, to say the least.  As James Taranto of the Wall Street Journal explained, in Lochner, “the court invalidated a state labor regulation on the ground that it violated the ‘liberty of contract,’ which the court held was an aspect of liberty protected by the 14th Amendment’s Due Process Clause.”  The case had nothing to do with federal “economic” laws.

Furthermore, as Jennifer Rubin of the Washington Post noted, there is no “economic laws” category in constitutional analysis.  Even if he meant to refer to the Commerce Clause, he would still be wrong.  The landmark cases of United States v. Lopez in 1995 and United States v. Morrison in 2000 tackled many of the same questions present in the current ObamaCare litigation, and in both instances, the Supreme Court struck down laws that Congress claimed were affecting interstate commerce.

Even if some may give Obama credit for toning down his rhetoric that striking down the law would be “unprecedented,” he still failed to address his comments on “judicial activism” and how “an unelected group of people would somehow overturn a duly constituted and passed law.”  He equated this complaint with that of conservative legal scholars who have condemned unaccountable judges that legislate from the bench.

Thanks to Obama’s comments, we are now looking at a Constitutional Law 101 question: Can the judicial branch invalidate a federal law on constitutional grounds?

The 1803 landmark case on judicial review, Marbury v. Madison explained that it is within the power of the judiciary to determine if laws passed by Congress meet constitutional muster.  And for the last 200+ years, the Supreme Court has followed that principle (for example, in United States v. Stevens, the Court struck down a federal law banning depictions of animal cruelty; in Reno v. ACLU the Court held as unconstitutional a federal law prohibiting the transmission of obscene or indecent communications over the internet to anyone under eighteen; in Trop v. Dulles, the Court invalidated a federal law that authorized revoking citizenship as punishment for desertion from the Army during wartime).

The problem is that Obama is confusing the mere overturning of a law with judicial activism.  As Heritage Fellow Robert Alt has explained:

[J]udicial activism occurs when judges write subjective policy preferences into their legal decisions rather than apply the constitutional or statutory provisions according to their original meaning or plain text.  Judicial activism may be either liberal or conservative; it is not a function of outcomes, but one of interpretation. Judicial activism does not necessarily involve striking down laws, but may occur when a judge applies his or her own policy preferences to uphold a statute or other government action which is clearly forbidden by the Constitution.

But the President’s criticism in his remarks Monday, which he did not adequately address at his second go-round, are far less nuanced: In his view, adherents to judicial restraint should uphold all laws passed by Congress.

And if the President was actually opposed to the same “judicial activism” that Alt described, then he contradicted himself in practically the same breath.  Obama said:

(emphasis added).  What Obama is asking the Justices to do is radical: Do not restrict your analysis to the law, but also consider economics, the “human element,” and the politics in play.  These rank near the top of the list of factors that Justices of the Supreme Court should avoid taking into account when deciding if a law is unconstitutional.  These are the policy preferences and lack of objectivity that Alt condemns, and that Justice Sotomayor claims are inevitable.

President Obama, while condemning a skewed view of “judicial activism” and encouraging actual activism by the Supreme Court, has already outlined a judicial regime that is far more “unprecedented” than anything that the Court will do with the ObamaCare cases.

The Week Obama Jumped the Shark

By Peter Wehner In a press conference on Monday, President Obama said, “I’d just remind conservative commentators that for years,...