In a Washington Post opinion piece, Charles Krauthammer makes the case that it is ObamaCare that is on trial—not the Supreme Court. The focus should remain on this “fundamentally transformative law” that “remak[es] one-sixth of the economy.”  Krauthammer notes that ObamaCare passed on strictly partisan lines, unlike other major social legislation such the Voting Rights Act, Medicare, and Medicaid.  He suggests that perhaps the Court will not give Congress the normal “restraint and deference” in considering the constitutionality of ObamaCare. 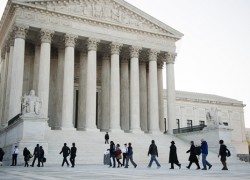 Whether or not the justices read the Washington Post opinion section, they do have before them a brief making just that point.  In an amicus brief filed with the Center for Constitutional Jurisprudence and other groups, Heritage argues that, although the Court typically accords legislation a presumption of constitutionality, it should not defer to Congress’ independent judgment concerning the constitutionality of ObamaCare. The reason is that all signs point to the fact that Congress dodged the question of constitutionality. Congress passed the law with a bare majority, on strict party lines, and using procedural maneuvers that are unheard of for legislation with such a sweeping effect. Its supporters openly admitted they had not even read the bill.  Recall then-Speaker Nancy Pelosi’s quip that Members “have to pass the bill so that you can find out what is in it…”  The brief also points out that landmark social legislation from the Civil Rights Act of 1964 to the Welfare Reform Act in 1996 passed with wife margins and enjoyed broad support from both sides of the aisle.  But ObamaCare would likely have looked much different if its supporters had been forced to compromise with the other side, rather than ramming it through with parliamentary tricks.

Krauthammer notes the irony in President Obama’s sudden transformation into an advocate for a restrained judiciary.  Of course, cautioning against partisanship on the Court should not just be directed at the conservative justices.  Why aren’t more people calling on Justices Sotomayor and Kagan to show they are not partisan, since they were appointed by President Obama?  As Krauthammer rightly comments:

Partisanship is four Democrat-appointed justices giving lock-step support to a law passed by a Democratic Congress and a Democratic president – after the case for its constitutionality had been reduced to rubble.

Just don’t hold your breath waiting for calls to impeach the liberal justices if the Supreme Court upholds ObamaCare.

Charles Murray Challenges Americans to Get Out of Their Bubble

Charles Murray likes making the upper middle-class a bit uncomfortable. That was exactly the goal of his latest book, “Coming...