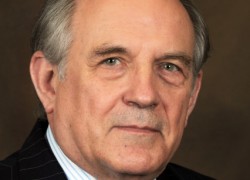 Charles Murray likes making the upper middle-class a bit uncomfortable. That was exactly the goal of his latest book, “Coming Apart: The State of White America, 1960-2010.” Included in it is a popular quiz, “How Thick Is Your Bubble?” The 25 questions offer a test for how well you related to middle-class Americans.

Murray, a libertarian political scientist and W.H. Brady Scholar at the American Enterprise Institute, spoke at Heritage this week about the book and the troubling trend he’s identified: a growing division among the upper middle-class and others. He joined Lachlan Markay and David Weinberger to talk about it.

Murray said white Americans began coming apart in the 1950s, when college-educated individuals separated themselves. This became particularly noticeable in centers of cultural and political influence like Hollywood and Washington. Today, Murray said, many Americans living there no longer understand what life is like in small-town America.

The book challenges Americans to get out of this bubble. That’s why he included the quiz, which we’ve reposted on Scribe. Those who have a high score aren’t living in a bubble. Those at the opposite end should probably take a road trip to reconnect with middle-class America.

The podcast runs about 10 minutes. It was produced with the help of Hannah Sternberg. Listen to previous interviews on Scribecast or subscribe to future episodes.

In Case You Missed It:  Greg Gutfeld Beats All Other Late Night Hosts While They Do Hyped Special On Climate Change
Posted in Financial, Freedoms and tagged Financial, Foundry, Freedom, United Socialist States of America.

Claire Waites, an Alabama school teacher who joined the local teachers union to obtain liability insurance, was pressured by her...