Israel will celebrate its 64th Independence Day (Yom Ha’atzmaut) on April 26, as the world warily watches developments regarding Iran’s nuclear buildup and the upheaval throughout the Arab world. 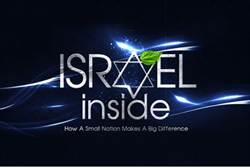 A new 55-minute documentary highlights the reasons for celebration. “Israel Inside: How a Small Nation Makes a Big Difference” portrays the often unreported side of Israel to the world.

The film is narrated by Dr. Tal Ben-Shahar, a New York Times Bestselling Author and former Harvard professor who examines the core character strengths that have enabled Israelis to overcome challenges and turn a desert into a flourishing nation.

“Israel Inside” was screened in Jerusalem at a special briefing on Tuesday, in which Tal Ben-Shahar and other interviewees in the film briefed members of the international media on the main messages they hope will emanate from the film as Israel enters its 65th year.

Rebecca Shore, head writer of “Inside Israel,” explained in a conversation with Arutz Sheva that the film is “a first shot in what we feel should be an all-out campaign to rebrand Israel in the eyes of the world and to show Israel beyond the conflict.

“Anyone who lives here knows that Israel is an amazing place with tremendous contributions, tremendous innovation and creativity and that is not the story that is being told to the world,” she added.

Erel Margalit, founder and chair of Jerusalem Venture Partners, pointed out that in the last 18 years, despite several wars which it has had to fight, “Israel has built the second hub for innovation in the world after the United States.

“I think it’s that spirit that now needs to be told,” Margalit said. “After all, we’re not only the people who invented things, we’re also the people who told stories to the world.”

During the film Dr. Ben-Shahar, who chose to return to Israel despite the fact that he was very successful at Harvard, explores what brought him back to the Jewish State as well as the character traits that have allowed Israelis to enjoy such innovative success.

“Many people said to me, ‘You’re crazy. You’re leaving a dream job in the best possible position you could ask for. Why are you coming back?’” said Ben-Shahar. “This is my story, of why I came back and not only why I came back but also what I found when I came back.”

As part of JerusalemOnlineU.com’s ‘64 FOR 64’ campaign to celebrate Israel’s 64th birthday, 64 leading communities worldwide will screen “Israel Inside” on or around Independence Day, with tens of thousands viewing the film in public programs at theaters, Jewish Community Centers and synagogues.

JerusalemOnlineU, as its founder and CEO Raphael Shore explained, is a “21st century solution to a decades old problem.”

“The problem is that the establishment that has been trying to give pride in being Jewish and pride in Israel to the next generation has not been successful for several decades,” said Shore. “What we’re doing is creating educational products through film and disseminating them through the internet, through television and through partnerships with many other organizations that make this education relevant and fun.”

Rolling up her sleeves should be new Undersecretary for Public Diplomacy Tara Sonenshine’s first act in office. For the chief...