Going to get messier and messier, we all know Holder is an idiot anyway and has proven that before, think all parties are letting this get way out of control now. The Black Panthers have already convicted Zimmerman, no trial, no jury, strait to the execution. 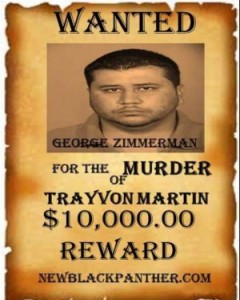 In a letter to Attorney General Eric Holder on Monday, obtained exclusively by The Daily Caller, a family member of George Zimmerman asked the nation’s top law enforcement officer why he has chosen to not arrest members of the New Black Panther Party for their rhetoric — some of which may fit the federal government’s definition of a hate crime — throughout the Trayvon Martin case.

The family member believes the reason Holder hasn’t made those arrests is because he, like the members of the New Black Panther Party, he is black.

“I am writing you to ask you why, when the law of the land is crystal clear, is your office not arresting the New Black Panthers for hate crimes?” the family member wrote to Holder.

“The Zimmerman family is in hiding because of the threats that have been made against us, yet the DOJ has maintained an eerie silence on this matter. These threats are very public. If you haven’t been paying attention just do a Google search and you will find plenty. Since when can a group of people in the United States put a bounty on someone’s head, circulate Wanted posters publicly, and still be walking the streets?”

The New Black Panthers have issued ultimatums to the Sanford authorities, saying they want Zimmerman arrested “dead or alive.” They have placed a bounty on Zimmerman’s head, and have called for the building of an army of vigilantes to track him down and effect a citizen’s arrest.

Most recently, the New Black Panther Party has called for violence.

In a conference call recorded over the weekend, the militant group said it planned to “suit up and boot up” and prepare for the next stages of the “race war.”

In Case You Missed It:  Pollster Doug Schoen Says The Democrats’ Midterm Optimism Might Be ‘Misguided’
Posted in Freedoms and tagged Eric Holder, Florida, Freedom, Racism.

Marking the similarities between President Barack Obama's time in office and former president Jimmy Carter's is nothing new. But as...