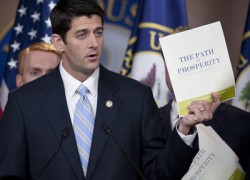 Buried deep in the President’s hyperbolic assault on the House-passed budget last week—with all that “radical vision” and “social Darwinism” rhetoric—was one kernel of truth: “This isn’t a budget supported by some small rump group in the Republican Party,” the President said. “This is now the party’s governing platform. This is what they’re running on.”

Exactly right. The fiscal plan authored by Budget Committee Chairman Paul D. Ryan (R–WI) is not just a blueprint for spending. It’s a vision for governing that deliberately and self-consciously seeks to advance “the timeless principles of the American Idea”—among them limited government, free enterprise, and economic liberty.

Ryan’s plan identifies the nation’s looming fiscal crisis as a product of big government. For the fourth consecutive year, a trillion-dollar-plus federal deficit burdens the nation, and the government’s publicly held debt is on course to exceed the size of the entire U.S. economy within a decade and to nearly double it by 2035. Clearly, this trend must be reversed.

The President’s “balanced approach” of demanding higher taxes to close the gap between spending and revenue misses the point. Deficits and debt are symptoms of a more fundamental problem: the inexorable growth of government that unfolded through the past century. It is the size and scope of government that must be limited, and that means reducing spending. That is the Ryan budget’s driving fiscal policy.

Big government is more than a budgetary problem. As government expands, it absorbs and suffocates what Ryan’s budget calls “the core institutions of a vibrant civil society—families, neighbors, churches and charities.” These institutions, not the government, are the source of America’s strength. Reducing the size of government, by reducing its spending, allows them to flourish.

Reversing the Keynesian-inspired meddling of the past several years, Ryan’s budget promotes the “prosperity of commerce,” as Hamilton termed it. The budget ends crony capitalism and other market distortions and therefore gives the economy room to grow. “This budget stops Washington from picking winners and losers across the economy,” the budget report says. “It rolls back corporate subsidies in the energy sector. It ends the taxpayer bailouts of failed financial institutions, including Fannie Mae and Freddie Mac. It repeals the government takeover of health care enacted last year and begins to move toward patient-centered reform.”

Federalism and free markets are also central to the budget’s domestic policy reforms. The budget’s restructuring of Medicaid and food stamps applies the principle of federalism: It shifts more control to the states over how the programs are administered and how dollars are spent. The Medicare premium support proposal—in which future enrollees choose their coverage from a variety of plans, rather than relying solely on the government—aims to bring to retirees’ health care the same benefits of market competition that exist throughout the economy. The Ryan budget transforms a huge, government-run entitlement into a model of patient-centered reform.

Finally, in this period of widespread dysfunction in Congress, the House’s adoption of its budget resolution stands as a refreshing exception—a necessary assertion of Congress’s governing responsibility and constitutional role. Until 1974, all congressional actions on the budget were piecemeal—separate spending and tax bills—and only the President had a comprehensive budget. The Congressional Budget Act of 1974, though, established for the first time a coordinated congressional budget process. It enhanced Congress’s authority on budgeting after 50 years of executive dominance. “With the Budget Act of 1974,” explains John A. Marini, “Congress became a dominant force in the formulation of fiscal policy, and a major player in setting national priorities.”

The Ryan budget may not fulfill all its ambitions perfectly; few congressional measures do. But it does express a conviction about governing rooted in America’s First Principles—a conviction reflected in its fiscal direction, its specific policies, and the very fact of its passage in the House.

Prepare for the Coming Race War

Going to get messier and messier, we all know Holder is an idiot anyway and has proven that before, think...