George Zimmerman turned himself in after charged filed, in the fatal shooting of the 17-year-old Martin, State Attorney Angela Corey announced on Wednesday. 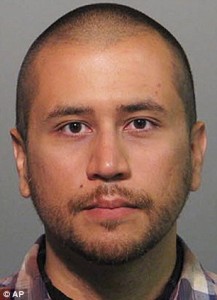 After 45 days of pressure from the media and black community charges of second-degree murder have been filed, if convicted George could face life in prison. Zimmerman was not charged to begin because police felt the evidence supported his claims. Corey giving in to the masses and ignoring the laws of the land decided to file charges under pressure anyways. There was a reason this wasn’t presented to a grand jury, he most likely wouldn’t have been charged there was well, so she went alone in making this decision. As long as the media make enough noise, someone will cave in eventually, as Corey did.

The Charge of Second degree is much harder to prove then manslaughter, But on Monday, Florida State prosecutor Corey announced that she would not empanel a grand jury to determine whether Zimmerman should be charged. Instead, she said she alone would make the decision. Why she did not want to present to a grand jury is unknown, or was too much pressure if they to felt there was not enough evidence to charge.

Lawyer Mark O’Mara attorney revealed himself as Zimmerman’s new legal counsel in his own question-and-answer session with reporters, he is also a legal analyst for numerous TV stations.

Zimmerman’s brother Robert, appearing on CNN hours after the charges were announced, said he was proud of his brother for ‘doing the right thing’.

Robert Zimmerman told host Piers Morgan: ‘There was no winner in this. Our brother could have been dead. He had to save his life by taking a life, and that’s no situation that anybody wants to be in ever’.

On Monday, a website was set up with a statement from Zimmerman where he claimed he has been ‘forced to leave my home… and ultimately my entire life’ as a result of the media outcry over Trayvon’s shooting.

The site also features a number of quotations from writers and philosophers.The web site is TheRealGeorgeZimmerman.com and is taking donations for his counsel.

If he is found not guilty will riots ensue? We can speculate that later, lets remember innocence until proven guilty, and let hope he can get a fair trial after the media and leftist have already convicted him in the last two weeks.

What is second degree murder?

Florida’s jury instructions (which are based on the Florida statute) spell out three elements that prosecutors must prove to establish second degree murder beyond a reasonable doubt:

The victim is deceased,
The victim’s death was caused by the defendant’s criminal act, and
There was an unlawful killing of the victim “by an act imminently dangerous to another and demonstrating a depraved mind without regard for human life.”
The last element — an “imminently dangerous” act that shows a “depraved mind” — is further defined by Florida’s jury instructions. Three elements must be present:

A “person of ordinary judgment” would know the act, or series of acts, “is reasonably certain to kill or do serious bodily injury to another”;
The act is “done from ill will, hatred, spite, or an evil intent”; and
The act is “of such a nature that the act itself indicates an indifference to human life.”
Note that prosecutors do not have to prove the defendant intended to cause death, Florida’s jury instructions state.

Compare that to a charge of first degree murder, which generally involves premeditation. Premeditation would mean the culprit planned and intentionally carried out the killing.

One of the biggest hurdles to Zimmerman’s arrest is going to be Florida’s “stand your ground” law, which gives people wide leeway to use lethal force if they feel threatened.

Is Zimmerman a racist, conservativepapers believes the “race” thing may fall by the wayside in this case because of an alleged soon-to-be-released report dating back to one year ago, detailing George Zimmerman’s pivotal role in helping to achieve justice for an older homeless black man in Sanford who was beaten up by a local policeman’s son, followed by a cover-up of the incident. Zimmerman went to multiple black churches in the area to seek help for the victim, and that Zimmerman’s efforts culminated in the eventual arrest of the assailant.

Apparently, information on this story has been readily available, but for whatever reason, the mainstream media has declined to follow-up on it. Lets hope this media inspired race war end soon with the trial soon on the way.

In Case You Missed It:  Evidence confirms that TWA Flight 800 was shot down by the U.S. military, followed by a massive coordinated cover-up
Posted in Freedoms and tagged Crime, Florida.

Got Principles? The Ryan Budget Does

Buried deep in the President’s hyperbolic assault on the House-passed budget last week—with all that “radical vision” and “social Darwinism”...