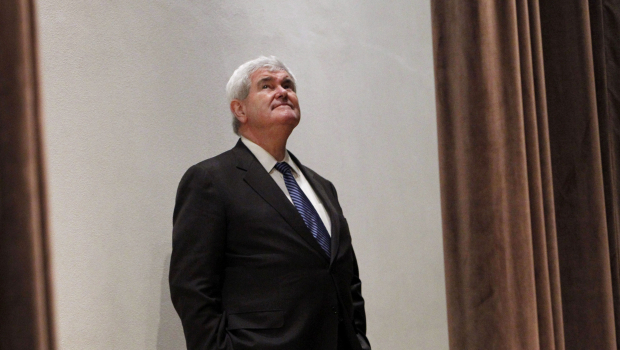 DOVER, Del. — During a meeting with 18 Delaware Tea Party leaders here on Wednesday, Newt Gingrich lambasted The Fox News Channel, accusing the cable news network that employed him as recently as last year of having been in the tank for Mitt Romney from the beginning of the Republican presidential fight and singling out former colleagues for attacking him out of what he characterized as personal jealousy.

“I think Fox has been for Romney all the way through,” Gingrich said during the private meeting at Wesley College to which RealClearPolitics was granted access. “In our experience, Callista and I both believe CNN is less biased than Fox this year. We are more likely to get neutral coverage out of CNN than we are of Fox, and we’re more likely to get distortion out of Fox. That’s just a fact.”

Gingrich’s contract as a Fox News contributor was terminated last spring, as he was gearing up for his White House run.

The former House Speaker’s blunt remarks about Fox came in response to a question from one of the Delaware Tea Party leaders about the manner in which his campaign has been treated by conservative media outlets.

Gingrich did not pull his punches in accusing Rupert Murdoch — the chairman and CEO of the News Corporation, Fox News’ parent company — of pushing for Romney behind the scenes.

“I assume it’s because Murdoch at some point said, ‘I want Romney,’ and so ‘fair and balanced’ became ‘Romney,'” Gingrich said. “And there’s no question that Fox had a lot to do with stopping my campaign because such a high percentage of our base watches Fox.”

Gingrich saved his most personal condemnation for George Will, a conservative columnist and frequent television commentator, who has been critical of the former Speaker throughout his campaign.

Gingrich said that Will was among the conservative media figures who harbored “personal jealousy” against him.

“In the case of Will, I was on [George] Stephanopoulos on Sunday morning with him, and it was kind of a ‘You’re not allowed to run for office — I mean, if you could run for office, why am I not running for office?'” Gingrich said. “And it’s almost like they were personally offended. You know, ‘This can’t be real, and how can this guy go do that?’ I got that reaction from Will a few years back about writing a book because I’m supposed to be a politician. He’s supposed to be the writer. Well, I’ve now written 24 books, and 13 of them are New York Times bestsellers. I mean there’s a morning when George ought to just get over it.”

Gingrich said that despite his having served two decades in Congress, he was the “least establishment candidate since Ronald Reagan” — another reason why he said he had not endeared himself to conservative media figures.

At one point in the meeting, Gingrich left the room to conduct a satellite interview with CNN anchor Wolf Blitzer before returning to take further questions from the conservative activists who sat at four tables that had been pushed together in the middle of a room.

Gingrich said that last June and July — a time when his campaign was widely considered dead in the water by political analysts — were “the two hardest months in 53 years of doing this” and lamented that people he knew personally at Fox News had written him off.

“The sense of being shocked that somebody I’d talk to and worked with for 10 or 11 years would say some of the things they said, if you go back and look at the transcripts for June, it was amazing to me,” he said. “They all said, ‘He’s dead.’ This is part of why I laugh at them now. I say, ‘Is this going to be like the fourth cycle where I’m gone?'”

Gingrich also took a direct shot at the political party whose presidential nomination he continues to seek, calling the GOP “a party that’s inarticulate.”

“The Republican Party is a managerial party that doesn’t like to fight, doesn’t like to read books,” Gingrich said. “This is why the Tea Party was so horrifying. Tea Partiers were actually learning about the Declaration of Independence. They wanted to talk about the Federalist Papers. It was weird. They could be golfing.”

Despite having won only two states and continuing to trail Romney by a substantial margin in the unofficial delegate count, Gingrich vowed once again to take his campaign to the Republican National Convention this summer.

The former Speaker said that his candidacy has helped compel Romney to “accommodate reality” on issues that are important to conservatives.

“I’m prepared to go all the way to Tampa, and I’m prepared to make the case for a Republican platform that is dramatically more conservative than the Etch A Sketch comments that Romney’s communications director made,” he said.

Gingrich has singled out Delaware as his best chance of notching a victory in one of the five states that hold Republican primaries on April 24.

Several of the Tea Party activists in the room had already endorsed him or said that they were planning to do so.

“That’s why if you will help me carry Delaware, it will be that big a jolt because it breaks up their narrative so decisively, and it actually says, ‘Oh Gosh, people actually get to make a decision, not just the power structure,'” Gingrich said. “And so I’d be very grateful if any of you feel comfortable endorsing me in public, doing it on Facebook, doing it on Twitter — I mean whatever techniques you want to use — issuing a press release. I think we have a real shot to pull this off.”

Earlier on Wednesday, Gingrich spoke to a crowd of about 150 people at the Newark Senior Center in northern Delaware where he did not mention Romney’s name until prompted by reporters in a brief scrum following the event.

“We’re working very hard to talk to people here and get as many votes as we can,” Gingrich said in Newark. “My experience in history is it’s not over until it’s over and that currently it’s very clear that Romney does not today have a majority of the delegates.”

Gingrich said that Rick Santorum’s exit from the race on Tuesday had given him hope of doing “much better” in places like Delaware, North Carolina, and Louisiana — a state that already held its primary but is still in the midst of its delegate-awarding process.

“I just had 15 people say ‘thank you’ for staying in,” Gingrich said. “We had 3,500 people send money to Newt.org online after 2 o’clock yesterday saying, ‘Please stay in.'”

Scott Conroy is a National Political Reporter for RealClearPolitics and a contributor for CBS News.

In Case You Missed It:  RIGHT ON CUE: CNN: The Science is Showing Us Having a Gas Stove in a Home Is “Like Having a Car Idling There” (VIDEO)
Posted in Freedoms and tagged Conservatism, Election, Freedom, Mitt Romney, Rick Santorum, Speaker Newt Gingrich, United Socialist States of America.

Report: Israel Told US No Attack Until Early Fall; Obama Wants Israel to Hold Off Until After Nov Elections