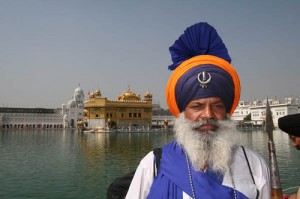 13 April 2012 marked the date of Vaisakhi, the harvest and Spring festival celebrated across northern India and esepcially the Punjab. Because India remains a predominantly rural country the event retains much of its original agrarian emphasis. Punjab itself became the breadbasket of India following the Green Revolution of the 1960s.

According to Sikh tradition the harvest festival of Vaisakhi has special importance because it was on this day in 1699 that the last of their spiritual leaders, Guru Gobind Singh, created the militant order of the Khalsa to resist oppression and forcible conversion to Islam by the Mughal colonialists under Emperor Aurangzeb. Standing outside his tent Gobind called for one person to sacrifice himself. As members of the crowd decided now was a good time to make themselves scarce on hearing this one volunteer did the exact opposite and presented himself before the Guru for sacrifice. He was then taken inside the tent and Gobind then emerged with a blood stained sword that only served to frighten the gathering further.  However four more times the Guru repeated the process so that one-by-one, four others stepped forward for the calling of their guru. to present themselves as a human sacrifice.  The same happened with the four, as Gobind emerged from the tent with his sword dripping with blood. 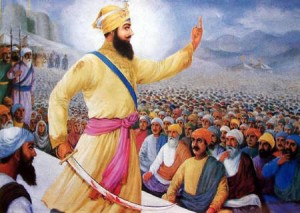 The Tenth Sikh guru asks for a head from his followers

Yet after the final ‘sacrifice’ the very same men emerged perfectly alive and healthy. Gobind revealed that this had merely been a test to examine the resolve of all present. The five volunteers were styled the ‘Panj Piare’ or ‘Five Beloved Ones’. Making Amrit (sacred water mixed with sugar) in an iron bowl the volunteers were asked to partake of this. They became the nucleus of the Khalsa or order of Sikh warriors and adopted the name Singh (Lion) as a result. These five, who were willing to sacrifice their lives for their Guru, were : Daya Ram (Bhai Daya Singh), Dharam Das (Bhai Dharam Singh), Himmat Rai (Bhai Himmat Singh), Mohkam Chand (Bhai Mohkam Singh), and Sahib Chand (Bhai Sahib Singh). The newswriter of the Mughal government, Ghulam Mohyiuddin, reporting to the emperor wrote:

He has abolished caste and custom, old rituals, beliefs and superstitions of the Hindus and bonded them in one single brotherhood. No one will be superior or inferior to another. Men of all castes have been made to eat out of the single bowl. Though orthodox men have opposed him, about twenty thousand men and women have taken baptism of steel at his hand on the first day. The Guru has also told the gathering: “I’ll call myself Gobind Singh only if I can make the meek sparrows pounce upon the hawks and tear them; only if one combatant of my force faces a legion of the enemy”

Today the traditional Sikh warriors known as Nihangs have continued the original traditions of the Khalsa. Although they are under threat from modernity it is in England that Niddar Singh, a 44-year-old former food packer from Wolverhampton, is now thought to be the only remaining master of this martial tradition of shastar vidya, because it takes years to learn and a commitment in time and energy that doesn’t suit modern lifestyles. Shastar vidya often gets confused with Gatka, a stick-fighting technique that was developed during British occupation of Punjab and was widely practised among Sikh soldiers in the British army. Nevertheless Niddar Singh has gained students from various communities, not just Sikhs.

The last remaining master of the Nihang Sikh martial tradition

In the twenty-first century when freedoms we take for granted are threatened by nefarious forces which will not stop at nothing to force an uncompromising totalitarian dictatorship upon the globe it is important to learn the lessons of the past from wherever they occurred. It is unfortunate that with their distinctive looks Sikhs in America became the target of hate the resulted from the terrorist attacks of 9/11. Yet how many Americans are aware that Sikhs, along with others from India in their thousands, laid down their lives for the cause of freedom in the two world wars. No less a figure than former British prime minister Margaret Thatcher paid tribute to the fact in 1995:

“The casualties suffered by the Indian Armed Forces during the Second World War bear eloquent tribute to their courage and their sacrifice — a total of almost 180,000 killed, missing, wounded, or prisoners of war. The commitment was enormous. By 1945 the Indian Army had more than two and a half million in its ranks. They fought in Burma, Singapore, Eritrea, the North African and Italian campaigns, Iraq and Syria. And of 182 awards of the Victoria cross — the highest award for gallantry — during the Second World War, 29 were won by soldiers of the Indian Armed Forces. “ 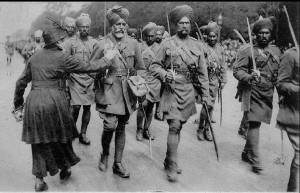 How ironic that the very same people who for centuries suffered their very own 9/11 were now being blamed for it in the aftermath of terrorist outrages. The very same Salafi forces which have smothered democratic aspirations of the Arab Spring have always held special animus against Sikhs who are along with Jews are banned from even entering Saudi Arabia. 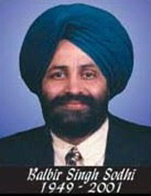 Yet this is more than a plea for mere cultural and community understanding in order to clean away the suffocating cobwebs of prejudice, fear and above all ignorance. The struggles of the Sikhs as symbolised by the formation of the martial order known as Khalsa as a bulwark against the colonialism of the Mughals which was annihilating the indigenous culture and ancient spirituality of India can nevertheless provide important inspiration for those who feel that they are facing apathy and insurmountable odds in daring to get their message across. Liberty so hard fought for and won can be lost so very easily and rapidly. In the face of such adversity it is worth recalling the words of Banda Singh Bahadur. Guru Gobind Singh was assassinated in 1708 having witnessed the death of his two eldest sons in battle and learnt that his two youngest boys had been bricked up alive by the Mughal governor of Sirhind for refusing to convert to Islam. Banda led a revolt against the Mughals which at one point posed a serious threat to their imperialist rule in parts of Punjab. on 10 December 1710 Emperor Bahadur Shah I issued a general warrant to:

“kill the worshippers of Nanak (the Sikhs), wherever they were to be found.” 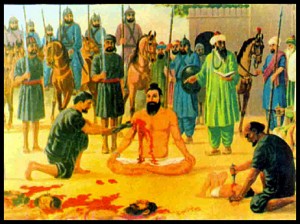 Banda Bahadur being tortured to death with red hot pincers

Finally captured in December 1715 he was paraded through Delhi in an iron cage along with fellow Sikh warriors who were given the choice between conversion to Islam or death: they invariably chose the latter. Banda Singh Bahadur was then given a short sword and ordered to kill his own son Ajay Singh. As Banda  sat unmoved the executioner cut the child with his sword and then thrust pieces of his flesh into Banda’s face. His liver was then removed and with force thrust into Banda Singh’s mouth. Yet even in the midst of this he refused to show any emotions. Mohammed Amin Khan, who was standing near, spoke as follows: “From your manner so far you appear to be a man of virtue, who believes in God, and in doing good deeds. You are also very intelligent. Can you tell me why you are having to suffer all this here?” Banda’s reply remains haunting in its clarity to this day:

“When the tyrants oppress their subjects to the limit, then God sends men like me on this earth to mete out punishment to them. But being human, we sometimes overstep the laws of justice, and for that we are made to pay whilst we are still here. God is not being unjust to me in any way.” 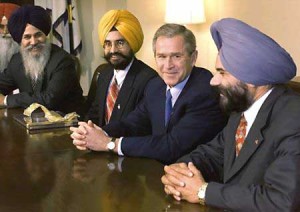 President George W. Bush meets with members of the U.S. based Sikh community in the White House September 26, 2001