Lt. Col. Shalom Eisner, the IDF officer videotaped striking a Danish anarchist with his gun, told a confidante Sunday that the leftist struck him first, causing fractures in his hand. 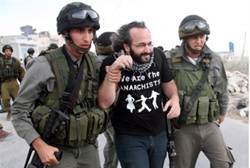 Arik Ben Shimon, who served under Eisner in the past, spoke to him after the incident and heard his version of what happened.

The Deputy Brigade Commander said that the moment taped and published in the internet was preceded by verbal and physical violence that the leftists perpetrated against him and his soldiers.

“You have to understand that this was a confrontation that lasted over two hours and not an event that lasted a few minutes,” Ben Shimon told Arutz Sheva. “This was the last line of defense before an area that was declared a ‘closed military zone’ and the video is obviously edited in a biased way, leaving out the part where that anarchist from Denmark hit Eisner with a stick on his right hand and caused fractures of his hand.”

Eisner’s hand is bandaged, Ben Shimon said, and yet he has gone back to his unit and continues to command over it.

Ben Shimon said that he has served alongside Eisner in similar events in the past and that he never let himself be provoked by the anarchists, and made sure not to let his soldiers be provoked either.

MK Michael Ben-Ari: officer “did what Bibi and Aharonovich lack the brains and guts to do.” MK Orlev: stop kangaroo court against officer.

MK Michael Ben-Ari (National Union) praised the officer who struck an anarchist in the face on Saturday for his action. “The IDF Deputy Brigade Commander deserves respect for doing what Bibi and Aharonovich lack the brains and guts to do,” he said – in a reference to Prime Minister Binyamin Netanyahu and the Minister for Public Security Yitzchak Aharonovich.

“Only an iron fist must be used against the extreme leftists who poke out soldiers’ eyes,” he added. “There was a serious threat to the soldiers’ well-being and the Deputy Brigade Commander had no choice.”

“By the way, had it been a Jewish settler who was beaten. we would not hear the leftist hypocrites’ choir screaming. It turns out they do not care about human rights but about the rights of terrorists and supporters of Arabs.”

In the course of a leftist-Arab riot near Bil’in several years ago, IDF Cpl. Michael Schwartzman lost an eye. In another incident at Bil’in, Border Police First Sergeant Natan Yasis fell off of a rock terrace while chasing after rioters and was killed.

MK Zevulun Orlev (Jewish Home) said that he was “saddened to see the hostile reactions against a senior officer in the army on a national mission against provocateurs whose entire aim was to make the IDF and the State of Israel look bad. It is too bad also that public figures from the left wing join those who are carrying out a kangaroo court against a person who is devoting his life to our homeland, without an inquiry and without learning what happened.”

Yesha Council Chairman Danny Dayan said: “I recommend to the angry politicians from the left who have already sealed the fate of the Bik’a Deputy Brigade Commander – to cool down and stop pushing their nose into the military establishment. I do not understand their passion for crucifying a senior officer facing off with a bunch of Israel haters.”

The anarchists uploaded a video to the Internet in which he is seen slamming his gun, magazine first, into the face of an ISM anarchist.

As is usual in such cases, the anarchists’ video is edited and does not include any documentation of their provocations vis-à-vis the reservist force that had to deal with them on the Jewish Sabbath. There was no evidence in the video that the anarchist was injured.

The incident occurred near Route 90, which runs along Israel’s eastern border. The anarchists were obviously ignoring the orders of the IDF force to clear the road.

The anarchists claimed that they were trying to conduct a peaceful protest by riding their bicycles on Route 90. IDF forces “brutally attacked” them, they claimed, and three activists were hospitalized after the event.

The IDF Spokesman’s Unit told Arutz Sheva that “This is a grave incident. The Head of Central Command, Maj. Gen. Nitzan Alon, has ordered that a thorough and serious inquiry be conducted. The inquiry will look into the circumstances that preceded the events documented in the video as well as the serious incident that is seen in the film. Lessons will be learned and proper steps will be taken.”

Tax Day 2012: Taxmageddon on the Horizon

In a bit of scheduling serendipity, Tax Freedom Day—the day when Americans finally earn enough income to pay off the...