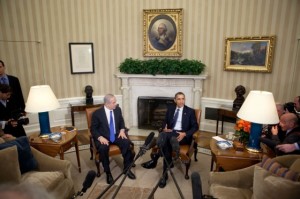 The Obama administration appears to be conducting an organized campaign of public pressure to stop Israel from attacking Iran’s well-developed nuclear-weapons program. So intense is this effort, and so determined is President Obama to succeed, that administration officials are now leaking highly sensitive information about Israel’s intentions and capabilities into the news media.

The president’s unwillingness to take preemptive military action against Tehran’s nuclear efforts has long been evident, notwithstanding his ritual incantation that “all options are on the table.” Equally evident is his fixation to ensure that Israel does not act unilaterally against Iran, a principal reason why Washington’s relations with Jerusalem are at their lowest ebb since Israel’s 1948 founding.

Indeed, the only conclusion to be drawn from Mr. Obama’s actions and rhetoric is that he fears an Israeli military strike more than he fears Iran achieving nuclear-weapons capability.

Current and former Obama advisers have repeatedly contended that a satisfactory negotiated outcome is possible, one where Iran will continue to develop a “peaceful” nuclear capability under international monitoring. How they can cling to this belief after years of Iran deceiving the International Atomic Energy Agency, going so far as to demolish buildings and excavate and remove thousands of cubic yards of rock and soil to try to conceal traces of radiation, is hard to fathom. Nonetheless, Team Obama still believes that Iran’s military-theocratic regime is capable of holding Pandora’s box but never opening it.

Equally disconcerting, administration officials, past and present, argue that a nuclear-capable Iran can be contained and deterred. Although Obama himself insists that containment is not his policy, I believe that assertion is true only in a limited sense: It is not his policy today. It is his policy for tomorrow, his Plan B, after the current sanctions and diplomacy fail to stop Iran. This is perhaps even more delusional than dreaming about Iran benignly pursuing “atoms for peace.”

Deterrence against the Soviet Union worked precariously and unnervingly at times, with some very narrow escapes from catastrophe, only because of a confluence of calculations between Washington and Moscow. There is no realistic prospect that Tehran’s religious autocracy will develop the same calculus of caution.

Still worse, even if Iran could be contained and deterred, there will undoubtedly be wider proliferation in the Middle East once Iran achieves nuclear weapons. Secretary of State Hillary Rodham Clinton herself has said that a weaponized Iran certainly means that Saudi Arabia, Egypt, Turkey, and perhaps others will seek their own nuclear capabilities. Thus, in a relatively short period, five to 10 years, there could be half a dozen or more nuclear-weapons states in the region.

Accordingly, stopping Iran from getting nuclear weapons in the first place must be America’s top priority. The prolonged failures of diplomacy and sanctions have brought the United States to the point where, realistically, there are only two alternatives: Either Iran’s mullahs get the bomb, or someone stops them militarily beforehand. This is the dilemma that leads Obama to pressure Israel against even thinking about the second alternative.

Three years of merciless private pressure against Israel having obviously failed to extract a commitment not to use force, the Obama administration looks to have determined two months ago to go public.

The first salvo was Defense Secretary Leon Panetta’s assertion that Israel might well strike Iran between April and June of this year. Nothing like letting the target know when to expect the attack.

Next came leaks to an author at Foreign Policy magazine’s Web site that Israel had secured basing rights from Azerbaijan, on Iran’s northern border, for possible use during a campaign against Tehran’s weapons program.

Launching strikes just a few hundred miles away from several likely targets – such as the Isfaham uranium conversion facility and the Natanz uranium enrichment plant – rather than having to attack from domestic airfields would give Israel both enormous tactical surprise and a critical leg up logistically.

One can assume with some confidence that Iran was not focused on the risk of Israeli bases in Azerbaijan, so hearing about it from US administration sources is a gift almost beyond measure. And one can also confidently assume that if that leak is not enough to make Israel bend its knee, more public revelations directed by the White House are only a matter of time.

Even now, Obama advisers could be revealing additional information to other governments behind closed doors. Perhaps we could ask Dmitri Medvedev.

Not only is this not the way to treat a close ally facing an existential challenge, it is directly contrary to America’s national interests. Israel is not the threat, Mr. President: Iran is.

John Bolton, a senior fellow at the American Enterprise Institute, served as US ambassador to the United Nations in 2005-06.

This article originally appeared in the Christian Science Monitor.

Flytilla Fails to Take Off