Think again before buying your next flat-screen television or computing device from Best Buy.

The struggling retail giant recently used profits from American consumers to fund the annual banquet of a group closely linked to Hamas. The Minnesota chapter of the Council on American-Islamic Relations (CAIR) recently listed Best Buy as a “Platinum Sponsor.” Best Buy has refused to rule out future support for CAIR through numerous messages to its public relations department. The big box retailer is already in chaos amid the recent resignation of its CEO for personal misconduct, dwindling sales and bond downgrades.

The United States government named CAIR an “unindicted co-conspirator” to fund the terrorist group Hamas in America’s most significant terror financing trial. The U.S. also identified CAIR as an agent of the Muslim Brotherhood, sharing the common goal of dismantling American institutions and turning the U.S. into a Sharia-compliant, Islamic state through incremental, stealth jihad.

CAIR spokesman Ibrahim Hooper (left) and CAIR co-founder and long-time board member Omar Ahmad (right) have both said they would like to see an America ruled by Sharia. The U.S. government has linked CAIR to the terror group Hamas in Gaza (center).

And that’s only the beginning. For all the details and links, see the bullet points below — after the jump at the bottom of the post.

Utterly outrageous, yes. But outrage is not enough. Action is required. The Goal is a commitment from Best Buy to never again use profits from American consumers to finance Islamic radicals.

Here is how you can make a difference:

Here are the details on CAIR:

CAIR’s Announcement of Best Buy as a Platinum Sponsor: 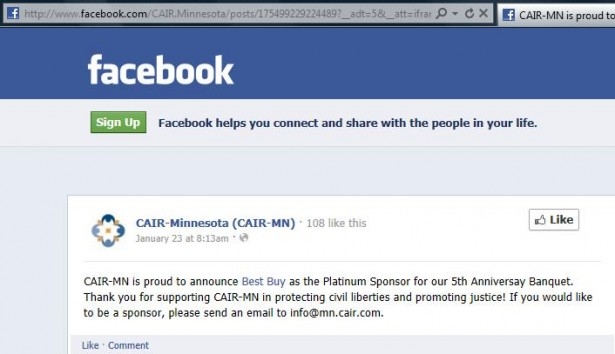 From canceling oil leases in his second week in office to denying the XL Pipeline this year President Obama and...