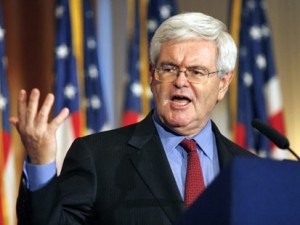 Newt says that if Romney can be stopped and this primary goes to the convention, he believes that he can indeed win the nomination:

Phase one has to be stopping Romney because the fact is if he gets 1,144 vote, he’s the nominee, fair and square — it’s over.

On the other hand, if as voters look at this — as happened last week, for example in Mississippi and in Alabama, as happened the previous week in Kansas — if people say, no, they don’t want Romney, then I think you get to a situation after June 26 where there is a 60-day conversation.

Santorum won’t have a majority, I won’t have a majority, Romney won’t, Ron Paul won’t — if that’s what happens, then we will have a real conversation about who can best beat Barack Obama. I think that most Republicans agree that if the key is to debate the president – he will have a billion-dollar campaign fund. If the key is who can take him on head to head, I think I am proving every day with this energy campaign, that I can take on Obama, that I can design strategies that put him in a huge disadvantage.